Glazed terracotta is a vibrant solid block which comes in the 16 regular dye colors.

Glazed terracotta requires a pickaxe to be mined. When mined without a pickaxe, it will drop nothing. 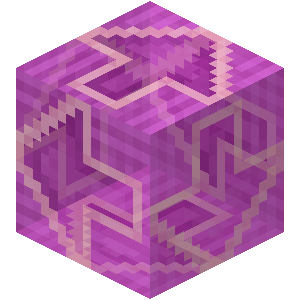 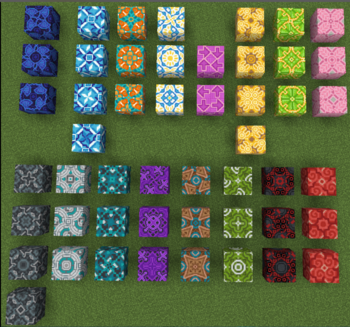 When placed, glazed terracotta's texture will rotate depending on the direction the player is facing. If several glazed terracotta blocks of the same color are placed in the "correct" orientation in a 2×2 or greater area, the textures will line up to create a singular image, as demonstrated in the image to the right.

The magenta glazed terracotta pattern includes an arrow (⬆) design which can be used to point to things or direct players. A guide is shown below, in order to correctly place the arrow direction (based on testing). "Facing" means where the player is relative to the front of the block being placed, such as 'below' means the player is below or roughly below the block.