Despite using iron in its crafting recipe, it cannot be smelted into iron nuggets.[2]

Shields are used for blocking incoming attacks. Using‌[Java Edition only] or sneaking‌[Bedrock Edition only] causes a player to slow to a sneaking pace, and after 5 game ticks (0.25 seconds), blockable attacks coming from in front of the player are negated, dealing no damage. When the shield blocks an attack of 4

or stronger, it takes damage equal to the strength of the attack rounded up.

All non-damage effects of ranged attacks, (such as being set on fire or poisoned by a poisonous arrow) are prevented. Knockback from melee attacks and projectiles is nullified, while knockback from explosions is reduced to one block distance.

The shield blocks any directional attacks coming from up to, but not including, 90° away from the horizontal direction the player is facing, that covers almost a full hemisphere in front of the player. The player's vertical rotation normally makes no difference to the direction of blocked attacks, however, a player facing straight up or straight down might be unable to block attacks from any direction. Similarly, an attack coming from directly above or directly below cannot be blocked as it has no horizontal direction.

When hit by an arrow or trident, the projectile ricochets off the shield and can hit other entities. 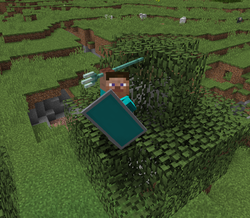