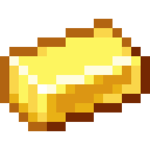 This article is about the item. For the ore, see Gold Ore. For the mineral block, see Block of Gold. For the nugget, see Gold Nugget.

Gold ingots are metal ingots used to craft various items and used as currency for bartering with piglins.

Zombified piglins have a 2.5% (1⁄40) chance of dropping a gold ingot if killed by a player or tamed wolf. The chance is increased by 1% per level of Looting, for a maximum of 5.5% with Looting III.

As a material for weapons, tools, and armor, gold is not a straight upgrade from iron (except in the case of horse armor). Gold has a higher mining speed and enchantability than any other material, but attack power and durability tends to be low. The golden pickaxe can harvest only those blocks that are harvestable by a wooden pickaxe.

Apprentice-level cleric villager buy 3 gold ingots for an emerald as part of their trade.

Piglins throw the player item(s) if the player throws or uses a gold ingot on them.