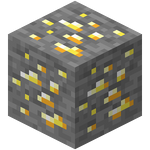 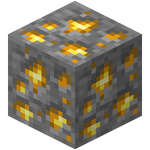 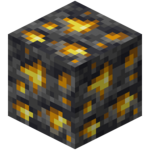 Gold ore is one of the rarest types of mineral blocks found underground. Deepslate gold ore is a variant found in the deepslate layer of the world, below y=0.‌[upcoming: JE 1.17]

Gold ore can generate in the Overworld in the form of mineral veins. Gold ore attempts to generate in veins of size 1-9, from levels -64 to 31, in all biomes. It is most likely to be found around layer -16.‌[upcoming: JE 1.17]

Gold ore also attempts to generate 30 times per chunk in veins of size 1-9, from levels 28 to 80, within any type of badlands, or within a chunk that is at least partially occupied by such a biome. As of Java Edition 1.16.4, on average they generate 12.4 ores per chunk.

Piglins become hostile toward players who mine gold ore, even if the player is wearing golden armor. Piglins also run toward any gold ores on the ground, and inspect it for 6 to 8 seconds before putting it in their inventory.

Gold ore can be placed under note blocks to produce "bass drum" sound.