From Minecraft Wiki
Jump to: navigation, search
For the DLC mob in Minecraft Dungeons, see MCD:Goat. 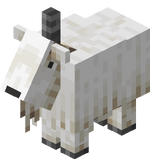 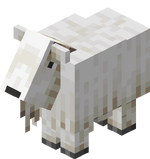 Groups of 2 to 3 goats spawn on extreme hills at the surface at a light level of 7 or higher, however, mountains is only a temporary spawn.[1]

Sometimes, a goat jumps up to 10 blocks high into the air. This usually happens if the goat is trying to cross an obstacle like a small hole in the ground or powder snow.

× 10 less fall damage and also avoid walking into powder snow. While avoiding walking over powder snow, they also might jump over it, sometimes even in a narrow jumping area.

Every 10–15 seconds, if a goat has seen a mob or player who has not moved since, the goat attacks from up to 16 blocks away, except for other goats. After choosing something to attack, the goat performs a small charging animation, then runs quickly toward the target and hits them, dealing significant knockback. The ram can travel up to 9 blocks.

Goats do not attack back if attacked by a player or mob. When attacked, they exhibit the same panicky fleeing that passive mobs exhibit.

Goats follow players that are within 10 blocks who are holding wheat. If goats are fed wheat, they enter love mode and breed. Like other animals that can breed, the player is granted 1–7 experience when they are bred.

Killing a baby goat yields no items nor experience.

A goat is milked by using a bucket on it, yielding a milk bucket.

Issues relating to "Goat" are maintained on the bug tracker. Report issues there.