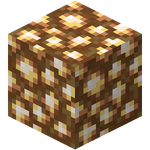 Glowstone is a light-emitting block that appears in the Nether. 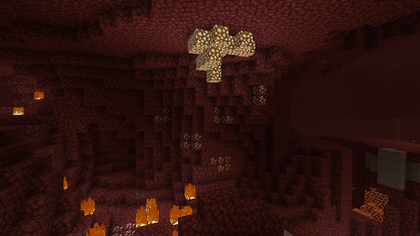 A naturally occurring blob of glowstone in the underside of netherrack.

Glowstone occurs naturally only in the Nether, where it generates in crystalline blobs on the underside of ceilings or overhangs. It can also generate as a part of bastion remnants.

Journeyman-level Cleric villagers offer to sell one glowstone for four emeralds.‌[Java Edition only]

Analyzing glowstone in a material reducer, it turns out to be a 1:1:1:1:1 mixture of Argon, Neon and Krypton noble gases, Boron and an unknown Element.‌[Bedrock and Education editions only]

When placing redstone on a glowstone block, being a transparent block, signals can pass from one block to another diagonally. Redstone wire, even though it may appear to connect up the side of a glowstone block and to the wire portion on top, does not send a redstone signal down the glowstone block. This makes glowstone effective for vertical diodes, logic gate designs, and space-efficient instant vertical redstone.

Note that upside-down slabs can be used for the same purpose, and are easier to obtain.

Glowstone can be placed under note blocks to produce pling sounds.

Glowstone is used to charge and make respawn anchors.

Glowstone blocks all sunlight, players and mobs suffocate inside it, and it blocks a Beacon beam, preventing the Beacon's activation. However, like transparent blocks, it does not prevent the opening of chests, monsters (including Slimes) cannot spawn on it, and it does not transfer a redstone signal. This behavior also occurs in Sea Lanterns.