From Minecraft Wiki
Jump to: navigation, search
This article is about the Minecraft counterpart. For the mob in Minecraft Earth, see MCE:Glow Squid.

This page describes content that may be included in a future update.
These features have appeared in development versions, but the full update containing them has not been released yet.
Glow Squid

The glow squid is a variant of squid with an aqua luminescent texture.

Glow squids do not spawn naturally but can be spawned using spawn eggs found in the Creative inventory or with the /summon command. 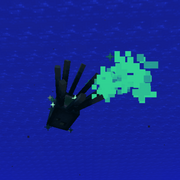 Glow squids behave like normal squids, swimming around in water aimlessly. They emit particles wherever they swim. They suffocate to death if they are beached on land for 15 seconds (300 game ticks). They are targeted by guardians and axolotls and are affected by the impaling enchantment. Glow squids on land will continue to use the swimming animation but will be unable to move more than 1 block.

When attacked, they will stop glowing for 5 seconds (100 game ticks) and flee at a speed much faster than that of the squid.

Glow squids are not affected by the NoAI NBT tag.[1]

Glow squids have entity data associated with them that contains various properties.

Issues relating to "Glow Squid" are maintained on the bug tracker. Report issues there.