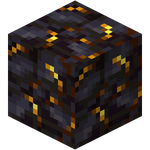 Gilded blackstone is a variant of blackstone that can drop itself or gold nuggets when mined.

Gilded blackstone generates as part of bastion remnants and can usually be found beneath bastion chests.

Issues relating to "Gilded Blackstone" are maintained on the bug tracker. Report issues there.