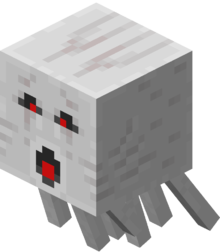 Ghasts are white, floating, jellyfish-like hostile mobs that live in the Nether and shoot explosive fireballs at the player. They are the second-largest mobs that naturally spawn in the game, the largest being the ender dragon.

To spawn naturally, ghasts require a solid block below them and 5×4×5 free space. They spawn only in the basalt deltas, nether wastes, and soul sand valley, all three of which exist only in the Nether dimension, and in any light level. In soul sand valleys, where only skeletons and ghasts spawn, ghasts cannot spawn if another ghast is within 16 blocks of spherical distance to the intended spawning location.

Ghasts do not spawn in nether fortresses.

They emit a loud screech when attacking the player. The sounds that the ghast makes have a minimum intensity regardless of their distance, meaning that they can sound closer than they actually are. They have a hitbox of 4×4×4 blocks, as well as 9 tentacles. The tentacles are not part of the ghast's hitbox.

Ghasts have a search range of 100 blocks,[1] an explosive attack and mobility. Unlike most other hostile mobs, the ghast does not have a pursuit mode; it does not attempt to draw closer to the player when at long range and is likely to float away if it's in a large space and not killed quickly enough.

Ghasts can cause other mobs to attack it,‌[BE only] but the ghast never targets other mobs; it targets only the player.

When a player comes within 16 blocks, it opens fire, strafing left and right and attempts to gain altitude.[verify] Ghasts flee when hit in Creative.

Ghasts require a line of sight to the player before firing. Any solid blocks (including transparent blocks) can interfere with the line of sight.

If the player is able to fly inside an aggressive ghast, it may die of shooting fireballs at itself. They are also careless about being hurt by blasts from short-range shots.

The ghast's fireball attack has a straight trajectory unaffected by gravity and a theoretically infinite range, although it disappears after 1 minute.[2] Fireballs do not track the player once fired, are slow, and can be deflected if the player hits them with a projectile, fishing lure or melee attack. At close range, it is one of the most powerful mob attacks in Minecraft, fourth only to the explosion of a creeper, the melee attack of an iron golem, and the explosion of a wither. A direct hit deals 6

The minimum blast resistance required to absorb all blast force of the ghast's fireballs is 4.034 (about the equivalent of basalt which is 4.2).

Ghasts have entity data associated with them that contains various properties.

Ghast fireballs have entity data associated with them that contains various properties.

Note: At 0:39 in the video, it is stated that the player can kill a ghast only with an arrow, or by deflecting a fireball. However, this is not true. It is possible to kill a ghast with anything, as long as the player can reach it. Usually, this would be when the ghast has spawned under a fairly low ceiling, so it can't fly away. It is also possible to use a fishing rod to pull a ghast in close, then hit it.