This article is about general gameplay in Minecraft. For instructional material, see Tutorials. 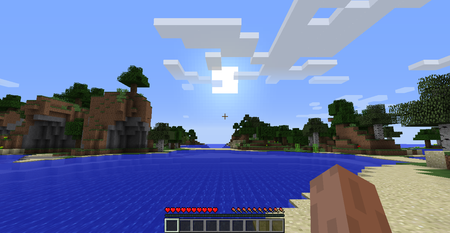 Gameplay in most game modes of Minecraft consists mainly of adding and destroying a variety of different blocks in a randomly generated world.

With these blocks, players can manipulate the world around them, building and destroying structures. As gameplay in Minecraft is so open and unguided, players often set their own goals and play the game as they see fit. An example of this is the Minecraft minigame, Spleef.

In Bedrock Edition, the gamemode can also be changed by quitting the world, going to Edit World, tapping either Creative or Survival, and then returning to the game if cheats are enabled. Hardcore cannot be set using commands.

In this mode, players have to gather all their materials to build, craft items and tools and gain experience points. There is a health, hunger, and armor bar, an inventory, and also a oxygen bar when underwater. If a player runs out of hearts (health), the player dies and returns to the spawn point. Upon death, the player emits smoke, loses all experience and items, and a death message. Maximum reach is 5 blocks.

The player has access to an infinite amount of almost all blocks and items available, and can destroy them instantly. Players are invulnerable, unless they fall into the void,‌[Java Edition only] and do not have health, armor, or hunger, and can fly. The player has access to items not available in Survival mode, e.g. spawn eggs. The player cannot see command blocks if they look through the creative GUI - they need to spawn command blocks with the /give or /setblock commands. Max reach is 6 blocks.

In this mode, which plays in the same way as Survival mode, the difficulty level is permanently set to "Hard", and when the player dies, the only choice is that the map must be deleted, or the player is sent permanently into spectator mode.

Technically, Hardcore is a game mode modifier rather than a game mode. However, without cheating, it is possible to get only "Hardcore Survival". To obtain "Hardcore Creative" mode, the player must edit the game world with external tools, or opening to LAN, and turning on cheats. There is almost no visible difference between "Hardcore Creative" and "Non-Hardcore Creative", because in Creative mode the only way to die is to fall into the Void or the /kill command. Because of this, "Hardcore" usually refers to "Hardcore Survival". On a server, a player who dies gets put into spectator mode, while all other players remain in survival mode. When looking at a hardcore singleplayer world, the gamemode is "Hardcore Mode!" and the color is red.

Hardcore is not technically a game mode and it cannot be enabled with the /gamemode command.

This game mode was implemented in 1.8. When in spectator mode, players can clip through blocks, see what other entities are seeing by left-clicking on them, and they are invisible to everything and everyone except for other spectators. The player can't interact with blocks, entities or their inventory. When in third-person mode, they look like a transparent, floating head with no body. The player can use the scroll wheel to adjust the speed at which their are flying, unlike flying in Creative mode.

Below is a brief summary of the different available features in each game mode.

Note: This video is outdated, as Spectator mode was added after this video's release.