From Minecraft Wiki
Jump to: navigation, search
For a guide about all the additions and changes in this update, see Java Edition guides/Frostburn Update. 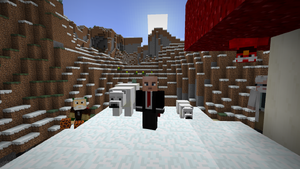 Image for the Frostburn Update released by Mojang

The Frostburn Update is the name for Java Edition 1.10, a major update released on June 8, 2016. It added some new features such as skeleton/zombie variants in snowy biomes and deserts respectively, polar bears, structure blocks for saving/loading structures in worlds, and an auto-jump feature.

The official name for the update, the Frostburn Update, was revealed on June 8, 2016, in a blog post on the Mojang website, the same day the update was released.[1]

Mojang released the first pre-release on June 2, 2016, and the second on June 7, one day before the update was released.