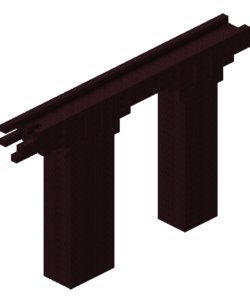 Nether fortresses may be generated in inconvenient places, where half of or even the majority of the fortress is buried in netherrack. In such a case, the interior is not filled with netherrack; all hallways and passages are clear except for open walkways and bridges. It is rare but possible for glowstone to generate inside the fortress pathways.

Nether fortresses are very large bridge-like complexes, composed mainly of nether bricks, that are supported by massive pillars that tower high above the lava oceans. A fortress has two areas, an exterior area of open bridges and an interior area of enclosed corridors. Both the bridges and corridors can end in a "broken" structure or may simply end without elaboration. Fortresses can tunnel through netherrack, giving the "exterior" areas an appearance of tunnels with nether brick floor and netherrack walls and ceilings. At broken sections the terrain is not cleared, which may create a tunnel that leads straight into a wall of netherrack.

A blaze spawner generated into the side of some netherrack.

Fortresses use a list of possible mobs to spawn that is separate from the rest of the Nether. Fortresses spawn magma cubes at a much higher rate, and also spawn two exclusive mobs not found anywhere else: blazes and wither skeletons. Normal skeletons and zombie pigmen can also appear. Endermen or ghasts do not spawn in fortresses.

The spawning algorithm has two checks:

A chest that generated in a fortress
See also: Chest loot

Fortresses generate nether fortress loot with chests in the indoor sections placed at some corridor turns. In Java Edition, each nether fortress chest contains 2–4 item stacks, with the following distribution: