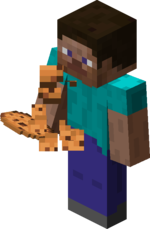 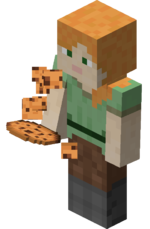 Food refers to any consumable items that, when eaten, restore hunger points and hunger saturation points, and sometimes cause status effects. They are essential to survival, as going without them eventually causes the player to starve, causing damage until reaching 5 hearts in Easy Mode, and half a heart on Normal Mode. Starvation damage kills the player in Hard and Hardcore modes.

Food is eaten by holding use item while having the food item selected in the hot bar or in the off-hand.

Cake cannot be eaten this way, and must instead be placed on a surface before being eaten.

The player must eat food regularly, or else begin to lose health, leading to death, except when the difficulty is set to Normal or lower.

With the exception of chorus fruit, golden apples, honey bottles, and milk, food cannot be eaten when the hunger bar is completely full.

In Java Edition, the player cannot eat in Peaceful Mode.

All food items and ingredients can be stacked in the inventory slots, except for milk, rabbit stew, mushroom stew, beetroot soup, suspicious stew, and cake.‌[Java Edition only]

This page covers food items for players; blocks and items that can be eaten by other mobs are not included here. 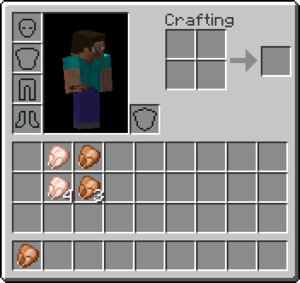 Players have two different food statistics, one of which is visible: The hunger level is visible, and the saturation level is not.

Saturation is the first statistic to decrease when a player performs energy-intensive actions, and it must be completely depleted before the visible hunger meter begins decreasing. Although the current saturation level is generally hidden, the player can tell that their saturation level is completely depleted if the visible hunger meter begins displaying a jittering effect.

Eating a food item replenishes a fixed number of hunger points and saturation points, based on the item. Some foods have a better ratio of saturation to hunger points replenished than others. Overeating the hunger bar does not overflow to saturation.

A player's current saturation level can never exceed their current hunger level. A player at a hunger level of 5, for example, can be at a maximum of 5 saturation. This is important to remember when choosing which foods to eat for the most efficient use of food: Highly saturating foods/low hunger-restoring foods should be eaten when the hunger bar is more full, especially when the bar has begun jittering. If the player eats highly saturating foods when the bar is low, saturation points are likely wasted, since saturation level can never exceed hunger level.

Most foods can be eaten by holding down the right-click button with a food item in hand. It takes 1.61 seconds to eat most foods; dried kelp takes 0.865 seconds to eat. Additionally, a player can hold food in their off-hand in Java Edition.

While eating, food particles form from the player's mouth correlated with their respective food item, and produces a munching noise. Eating also slows the user significantly.

Unlike other foods, cake has to be eaten by placing it, then right-clicking on its block form. Eating cake is instant and it has 7 edible slices, each giving 2 (

Nourishment is defined as the ratio of saturation to hunger points restored. Foods with higher nourishment values should be eaten when the hunger bar is more full.

The "nourishment" table below can help by categorizing foods by their saturation-to-hunger restoration ratios. See the more detailed Foods table for the exact hunger and saturation statistics of each food.

The following items cannot be eaten on their own. Instead, they are used to craft consumable food items.