From Minecraft Wiki
Jump to: navigation, search
This article is about the form of transportation available in Creative and Spectator modes. For the flight attainable when using the elytra, see Gliding. 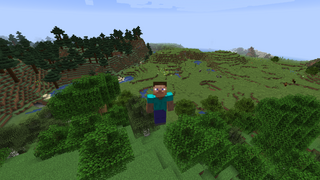 A player flying in creative mode.

Flying is the most versatile form of transportation and is available in Creative and Spectator mode.

Flying is not limited by any processes such as food depletion, which limits sprinting. Flying can be toggled by double-tapping the "jump" key while playing in creative mode (or when the "Mayfly" permission has been given to the player ‌[Bedrock and Education editions only]) and can be activated at any altitude. The player can gain or lose altitude while flying by pressing the jump or sneak keys, respectively. Holding sprint allows the player to move faster while flying. In Creative mode, flying is automatically disabled if the player lowers onto a surface while in the air. In Spectator mode, flying cannot be disabled because players can fly through all blocks. Flying increases the player's field of view by 10%; it is increased further when holding sprint. (This may have to be attempted several times before it works.)

Flying makes the player move at around 10.92 meters/second (39.312 km/h), which is approximately 250% of the normal walking speed, being 4.36 meters/second (15.724 km/h). This is increased further when holding the sprint key to 21.6 meters/second (77.76 km/h). When flying, friction is reduced to a level equivalent to when on ice. A player flying in fluids or cobwebs neither sinks nor slows down. Speed effect do not increase flying speed.[1] In the spectator mode, scrolling up on the scroll wheel increases speed while scrolling down decreases it. On the Java edition, players that stop flying drift a few blocks in the air, while in other versions, they come to a complete stop. Also, players on other versions keep flying if they touch the ground while flying, where on Java, players automatically stop flying if they touch any surface.

Issues relating to "Flying" are maintained on the bug tracker. Report issues there.