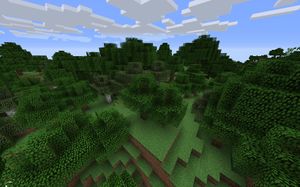 A forest biome as seen from above.

This article is about the regular Forest. For other forest biomes, see Forest (disambiguation).

Forests are temperate forested biomes. There are a total of three variants in the biome family.

Prior to Bedrock Edition 1.16.0, the forest use the same mob spawning chances as birch forests.