From Minecraft Wiki
(Redirected from Flint and steel)
Jump to: navigation, search
Flint and Steel 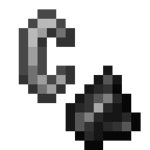 A flint and steel is a tool used to light fires.

Farmer villagers before Java Edition 1.8 would trade flint and steel for emeralds. If a world was created before this version, such a villager can be brought forward to current versions and still traded with as a renewable source of flint and steel.

When used on top of a solid, fully opaque block or on the sides of a flammable block, the flint and steel set a fire on the surface on which it was used. Flint and steel have 65 uses. If used on a transparent block (such as glass) or an underwater block, it does not start a fire but still consumes durability. Durability is also consumed if it is used on an already existing fire.

It also can be used to light nether portals.

Flint and steel can receive the following enchantments, but only through an anvil:

Issues relating to "Flint and Steel" are maintained on the bug tracker. Report issues there.