From Minecraft Wiki
(Redirected from Flat)
Jump to: navigation, search 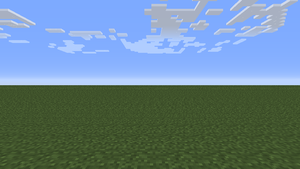 Superflat (Flat in Bedrock Edition) is a world type replacing the normal varied terrain of the Overworld, with customizable layers in Java Edition.

In a classic (default) Superflat world, the terrain consists of one layer of bedrock, two layers of dirt, and one layer of grass. Because the entire world is a plains biome by default, villages generate relatively frequently.‌[Java Edition only] In Bedrock Edition and New Nintendo 3DS Edition, however, villages do not generate in Flat worlds.

The surface of the world is completely flat and at height y=4, with the exception of villages and other structures if they are enabled. Since the height limit (256) is unchanged, there is almost one-third more vertical height available to build above-ground structures as compared to a normal world. Mobs still spawn normally. Because of the low altitude of the world, slimes spawn frequently.

Superflat worlds allow the player to access the Nether by building a nether portal in the usual way.

Superflat worlds also allow the player to access the End, which generates as a normal dimension of floating islands.

In order to create a Superflat world in a multiplayer server, the level-type flag in server.properties must be FLAT, instead of DEFAULT.

Once a multiplayer world is created, the server.properties fields have no effect on chunk generation. Instead, just like in singleplayer, the level.dat fields for generatorName, generatorVersion, and generatorOptions are used instead. If you want to alter a world after initial creation, these are the settings to change.

In Java Edition, the structure and content of a Superflat world can be customized. Bedrock Edition has no interface for customizing flat worlds; it always uses the default configuration (one layer of bedrock, two layers of dirt, and a layer of grass blocks) even when the Seed Picker is used. However, custom flat worlds are supported internally, and can be used by modifying FlatWorldLayers in the world's level.dat file using an external editor.

Upon selecting "Superflat" in the World Type box, a new button appears underneath labeled "Customize". The customize menu starts out with the "Classic Flat" preset of one layer of grass, two dirt layers, and then bedrock underneath. There are two buttons available to customize Superflat worlds, which include the "Remove Layer" button, used for removing unwanted types of layers, and the "Presets" button, used for selecting any of eight currently available presets.

If the player can understand the preset code syntax, they can create presets of their own by entering valid information into the preset code box, where these changes can be previewed and applied. (Direct Customization is not available.) In addition, superflat worlds can have certain terrain features, besides villages, such as tall grass, lakes, and strongholds, which can additionally be customized using the same code box for block layers. These changes also made tweaks to previous world codes, to include the new generation features.

Presets are shareable. As a preset is selected, a box on top of the screen has a code that is highlightable and copyable. Similar to how new worlds are shared through seeds, presets can be entered into this box to recreate someone else's preset.

The Void is a completely empty biome that generates only a single structure: a 33×33 stone platform with a single block of cobblestone in the center. No mobs (passive or hostile) can spawn without spawn eggs, monster spawners or commands. It can be accessed only through The Void superflat preset or Buffet world selection. If generated using Buffet, it is a completely barren and featureless world consisting of stone, void air, and maybe water and bedrock.

The preset code is a string of numbers, semicolons(;), colons(:), commas(,), and asterisks(*). Each code has three main parts, divided by semicolons. They are:

Note that there are several criteria that must be satisfied before some features can appear:

For example, to have an 'End' superflat world with obsidian pillars, the biome ID must be the_end, the superflat string must contain 'decoration', and the top surface block must be End Stone. In this particular case 'Structures' does not need to be turned on in the world options.

Attempting to use an incorrectly formatted preset code causes the game to default to the Classic preset.

It consists of the following elements:

This table applies to the original preset. The resources below can always be found, regardless of the "Generate Structures" option.

The resources below can be found only if the "Generate Structures" option is enabled. These do not include resources that can be obtained via trading with villagers, hero of the village gift, fishing, and chest loot from structures.

Issues relating to "Superflat" are maintained on the bug tracker. Report issues there.