"Burning" redirects here. For the gameplay mechanic used to cook items in a furnace with fuel, see Smelting. For the block that can be used to cook food or act as a light source or smoke signal, see Campfire.

Fire is a harmful non-solid block that can spread to nearby flammable blocks.

Soul fire‌[upcoming: JE 1.16 & BE 1.16] is a turquoise variation of fire that is created when soul soil is ignited.

Fire naturally generates across the terrain of the Nether. Soul fire generates exclusively in soul sand valley biomes.‌[upcoming: JE 1.16 & BE 1.16]

Lava generated next to flammable blocks can naturally ignite fires (see below).

It can be placed using flint and steel or a fire charge. Fire ignited on soul sand or soul soil becomes soul fire.‌[upcoming: JE 1.16 & BE 1.16] 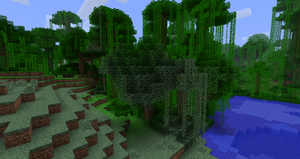 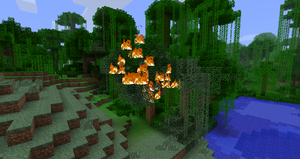 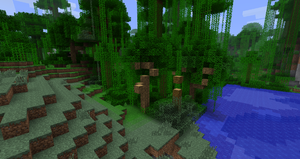 When placed, fire burns for a short and randomly determined amount of time. If nothing flammable is adjacent to it, the flames die out. Water that touches fire extinguishes it.

Fire does not drop anything when destroyed.

Players and many mobs burn when exposed to fire. Burning obstructs the player's view slightly and, unless the player or mob has Fire Resistance, inflicts damage at a rate of 1

per second. This is the same rate that the player gains health in Peaceful difficulty, so burning alone cannot kill the player in this mode. Soul fire‌[upcoming: JE 1.16 & BE 1.16] deals damage at a rate of 2

, making it more dangerous than normal fire. After leaving a fire source, the player or mob continues burning for some time depending on how long it was exposed to the fire.[more information needed] Players and mobs that are burning can be extinguished by rain, water, or a cauldron.

Nether mobs are invulnerable to fire and cannot burn. Exceptions include piglins and hoglins.‌[upcoming: JE 1.16 & BE 1.16] 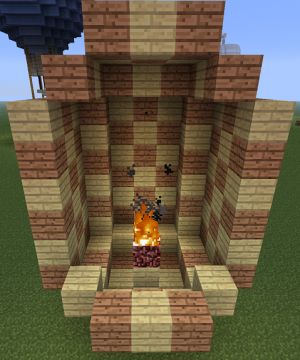 Fire spreads over flammable surfaces and can climb up walls, across floors and ceilings, and over small gaps. More precisely, a fire block can turn any air block that is adjacent to a flammable block into a fire block. This can happen at a distance of up to one block downward, one block sideways (including diagonals), and four blocks upward of the original fire block (not the block the fire is on/next to). Therefore if the player is using fire to build a fireplace, caution is needed. Blocks in the way do not prevent fire from igniting blocks above it—so even if the player protects a wooden roof with cobblestone between it and the fire, the fire ignores that cobblestone.

Unlike normal fire, soul fire‌[upcoming: JE 1.16 & BE 1.16] cannot spread, and does not burn any flammable blocks nearby.

In the following table, the higher the encouragement, the more quickly a block catches fire if fire is available to spread there. The higher the flammability, the more quickly a block on fire burns away. These are relative values; actual flammability and burn time depends not only on these values, but on difficulty, rain, the age of the fire, and a certain amount of randomness due to block ticks, among other things.[more information needed] Fire spread is also reduced significantly if the flammable blocks are located in a rather humid biome. Humid biomes are swamp, mushroom island and jungle with all of their respective variants excluding jungle edge.

Fire burns out after a while on its own; however, the player may want to extinguish the fire as soon as possible to prevent damage. Punching or hitting the side of a burning block extinguishes the fire on that side and makes a "fizz" sound. Hitting fire while holding a tool does not reduce the tool's durability. Placing blocks on the fire also extinguishes it. Water and lava extinguish fires that they flow into, and thrown splash and lingering water bottles extinguish fires in the block hit and the four blocks horizontally surrounding it.

If fire is exposed to rain, it extinguishes quickly.

Fire can be extinguished by hitting it using a sword or trident in Creative mode, unlike other blocks.[1][until JE 1.16]

Soul fire‌[upcoming: JE 1.16 & BE 1.16] never extinguishes unless punched or when it receives a block update and finds there is no soul soil or soul sand below it.

When lit, netherrack and magma blocks maintain fire forever, unless extinguished by any method except rain. Bedrock in the End also burns eternally. Eternal fire cannot exist on the sides of these blocks.

Lighting fire to a beehive or bee nest causes the contained bees to be ejected from the block. A campfire can also be used to smoke beehives, preventing bees from becoming aggressive when resources are taken.

‌In Java Edition 1.16 and Bedrock Edition 1.16.0, soul fire repels piglins. Like hoglins, they are not fire-resistant, which is unique among Nether mobs.