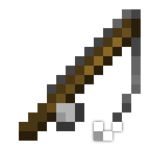 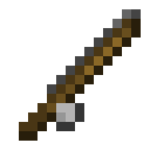 This article is about the fishing rod. For the gameplay mechanic, see Fishing.

If a carrot on a stick or a warped fungus on a stick is used to the point of zero durability, it becomes a fishing rod.

Fishing rods can be cast into water. After a short period of time, A stream of particles will approach the fishing rod. If the rod is reeled in once the particles "bite" the bobber, the player will obtain a fish, junk, or possibly a treasure item.

The fishing rod can be used to hook mobs, items and some entities, and even players. The fishing rod can then be reeled in, which drags them toward the player and deals no damage. Reeling in a mob or entity costs 5 points of durability, and reeling in an item costs 3 points. Reeling a mob pulls it toward the player with a speed of 1⁄10 the distance between mob and player. 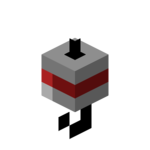