This article is about the status effect. For the enchantment, see Fire Protection.
Fire Resistance 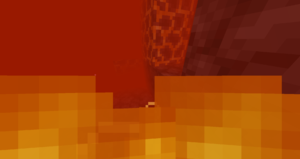 What it looks like inside lava using Fire Resistance.

Grants immunity to damage from fire, blaze fireballs, fire charges, magma blocks, and lava, similar to /gamerule fireDamage false. Negates the fire damage from bows enchanted with Flame and swords enchanted with Fire Aspect, but does not affect the attacks themselves. Players also see better under lava when they have the Fire Resistance effect. In Bedrock Edition, the view with the effect is stronger than in Java Edition.[1]

Boss mobs and most nether mobs are immune to Fire Resistance.[more information needed]

Most Nether mobs (excluding endermen, skeletons, piglins and hoglins) are naturally resistant to fire and lava without requiring the Fire Resistance status effect.

While Fire Resistance prevents fire damage, it does not prevent the fire itself, meaning the fire obstructing the player's view is still visible. This also means that fire persisting after the effect expires can damage the entity.