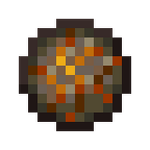 Fire charges are combat items that light fires when used.

Piglins may barter 1 fire charge when given a gold ingot.

Fire charges can be used as ammunition for dispensers, or as a substitute for flint and steel.

When used, it instantly lights a fire, similar to flint and steel. The fire charge is consumed in the process. It can prime TNT and light nether portals and campfires like flint and steel. However, it cannot be used to detonate creepers.

When a fire charge is fired from a dispenser, it acts like a blaze's fireball, flying in a straight line (with a random offset from the dispenser's line of sight). It places fire when it hits a block. It produces no explosive effect. If it hits a player or entity, it can deal up to 9

fire damage from being set on fire. These fireballs can prime minecarts with TNT. They cannot be deflected.

Shot fire charges have entity data that define various properties of the entity.

Issues relating to "Fire Charge" are maintained on the bug tracker. Report issues there.