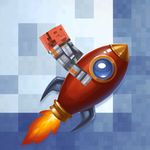 Mineville (formerly InPVP) is a Minecraft Featured Server on Bedrock Edition platform. During the time when InPVP was the main branch, it had the highest player count for Bedrock in history (27,123 as of 2019). It is a roleplay server, though the player can also play minigames at the InPvP Space Station (a Mineville branch). Mineville is owned by MobCrush, a mobile streaming service. Mineville also has two sister Minecraft servers on Java Edition; SaicoPvP and The Legend Craft (an Italian Server). The IP of Mineville is play.inpvp.net:19132, otherwise, it can be accessed via the Featured Servers Panel.

In "Skyblock" players start on a tiny island in the sky, with a cobblestone generator, a chest, and a tree. There is another island nearby where you can get to the market. At the market you can buy and sell items for "Skybucks". In order to play on skyblock, you have to pay "Minecoins". You can also play with other people, as long as you both pay.

In "SkyWars", players spawn on an island in the sky with 3 chests full of blocks, items, weapons and armor. Players have to use blocks to pile over to other islands and kill the other players. The last one standing wins.

In "TNT Run", TNT will fall as players run across the TNT path; if they fall in the void they are out.

"Money Wars" is similar to "SkyWars", but contains item generators and a shop. Players can respawn if they have a bed; if a player's bed is destroyed and somebody has killed them, they are out.

In "Block Hunt", each player spawns as a block or a hunter. Blocks are turned invisible and are followed by a block. Players have to hide from the hunters to win. Hunters have to find the blocks before the time runs out.

The game "Tower Wars" is "Capture The Flag", but with upgrades and resources. The map originally was dark with an "End sky", but now, it has 2 maps that alternate.

In "Survival Games", players start on small platforms in a circle in the air, as soon as the game starts, players receive an elytra and can fly all around the map until they land. When the player lands, they can start looting before the invincibility timer runs out and they will be able to fight people. The last one standing wins the game.

"High School Roleplay" is a school where players can complete classes to receive rewards.

The goal in the game "Fighting Class" is to fight mobs and get a specific amount of items from them to complete lessons. When players complete 10 lessons, they receive a Gladiator Helmet.

The goal in the game "Building Class" is to build exactly like the example. The example will only be shown for a specific amount of time before it disappears. When it disappears, it is the job of the players to memorize the building and build it between 80% and 100% correct. When players complete 10 lessons, they receive a Builder Cap.

The goal in the game "Mining Class" is to mine specific ores, melt them in the furnace and give them to the teacher. When players complete 10 lessons, they will receive a Miner Helmet.

The goal in the game "Cooking Class" is to farm and craft specific food. When players complete 10 lessons, they will receive a Hay Helmet.

The "Driving Class" game is one of the classes that players have to pay MineCoins in order to play it. After a player buys the class, they will also receive a Racing Kart in the lobby. There are 3 courses where players can ride on and the goal is to be as quick as possible to get a place on the course leaderboards. However, this class does not have any reward.

The "Pet Class" game is one of the classes that players have to pay MineCoins in order to play it. In this class, players are able to play small parkours on time with their pet. If players are really quick, players can even get on the leaderboards. However, this class does not have any reward.

The "Prison" game is all about mining from Mine A to Mine I. When players complete all mines by mining and selling the ores, they receive a Miner Costume. Players will also receive a prestige star in front of their name in the chat.