This page has been tagged for and is currently awaiting deletion pending the criteria below. [discuss]
Criteria: This page should be deleted only when a consensus is reached.
Reason: See Talk:Featured servers 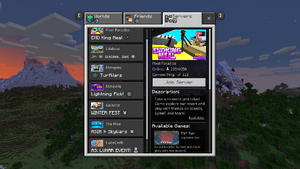 An image of all featured Servers in the Bedrock Edition

Featured servers are community servers for Bedrock Edition, which are partnered with Mojang Studios and are accessible from the in-game server list. In the console versions, they are the only servers accessible besides Realms. Although the Bedrock Edition lacks the Mini Games of the Legacy Console Edition, featured servers can have their own minigames to play online. Featured servers require a Microsoft account[1] and require a paid multiplayer subscription on consoles only. However, they have microtransactions that can be purchased from their own sections of the Marketplace.

Featured servers were first added as part of 1.2.0, the Better Together Update. There are currently six featured servers, and Mojang plans to add more in the future. Server owners with registered business identities can apply for the partner program. Mojang provides partnered servers with backend support.[1]

Xbox Live is a social network for gamers, and featured servers require the player to have a gamertag. The player can Add, Mute, Block or Report Players from the pause menu. The server partners work with a team of volunteers to keep an eye out for bad behavior, including bullying and cheating, and help report issues. Each server partner includes their own expanded word filter list to make their server experience friendly for all ages. At Mojang's request, the official server partners – CubeCraft, Mineville City, Lifeboat, The Hive and Mineplex – have removed private messaging, including the /tell command, to allow more thorough moderation across all parts of the server.[2]