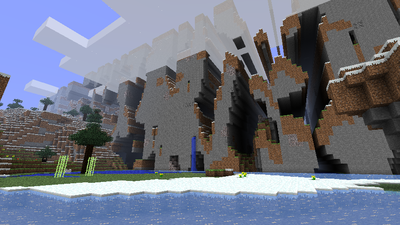 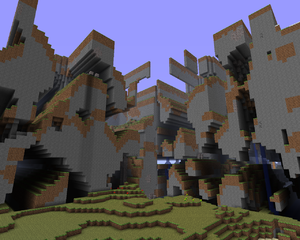 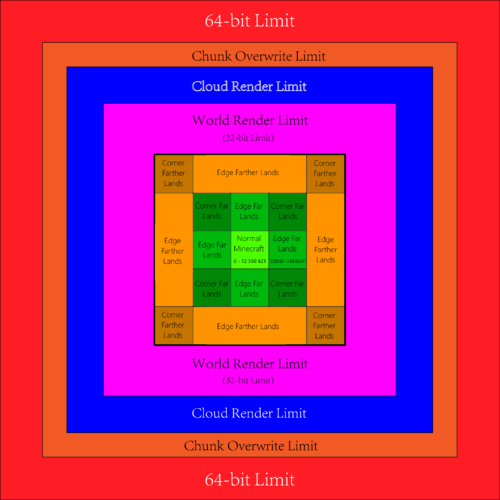 Both areas of the Far Lands feature extremely strange terrain, although they are significantly different.

In both zones, any area beneath sea level, excluding regular caves, are flooded with water. The Far Lands generate biomes, but most biomes are indistinguishable except by the color of grass. Desert biomes are covered in sand and snow-covered biomes are covered with snow, excluding the very top of the map due to the height build limit. Trees generate somewhat normally, but can be found only in the upper areas of the map due to the need for grass. However, if the player opens the debug screen, it always claims that the biome is a forest.

Ores can be found up to their respective maximum heights just like in the normal world. Unfortunately, due to the flooding, everything except for coal can be extremely difficult to acquire. In the solid areas of the Far Lands, normal caves still generate but are limited and small. Along with the caves, dungeons (which are extremely rare) and lakes can be found in solid areas. Water and lava springs can be found out in the open and in caves.

Much of the open space in both areas are shrouded in darkness and thus hostile mobs run rampant, making the Far Lands as a whole incredibly dangerous. This is especially problematic in the Corner Far Lands due to its layered structure. The flooded zones have an abundance of squid.

The boundary of the Far Lands' edge (that is, where it meets the regular map) looks like a solid wall, all the way to the top of the map (Y-coordinate 127 in Beta 1.8 and prior) that is filled with gaping holes perpendicular to the edge. These holes are extremely long, perhaps "infinite", and on the whole seem to change very little no matter how deep the player ventures. They can be blocked, either partially or completely, but such blockages are rare and temporary. This "Wall of Swiss cheese" pattern continues beneath ground level, all the way to the bottom of the map, and seems to be partially caused by a large one-dimensional distortion in the map generator's output. This area is sometimes referred to as "The Loop".

At a corner, when two perpendicular Edge Far Lands sections meet, the Corner Far Lands begin to generate. Unlike the infinite-length holes in the Edge Far Lands, the Corner Far Lands contains more normal terrain. This terrain is "stacked" on top of itself to create a bizarre sandwich with layers of ground and air, which gives it its nickname, "The Stack". Each layer looks like a giant floating continent, hovering over the next layer, which is shadowed.

The majority of the generated world is Corner Far Lands, as the "normal" map (before ±12,550,821 mark) makes only the center of the world, and the Edge Far Lands make only its continued sides.

The number of layers is not always the same and varies between five to seven (fusing together and splitting every so often). Layers can be grouped into three categories:

Sometimes, there are extremely tall pillars of gravel that stretch from the ground to the ceiling of a layer. Likewise, some of the beaches that collapse create pillars of sand all the way down to the ground, despite there not being that much sand, to begin with. The Corner Far Lands is also prone to having near-perfect diagonal lines being carved into the ceilings or floors of layers. If traced, these lines all intersect at the corner (X/Z ±12,550,821). This seems similar to how the Edge Far Lands have a consistent pattern along lines perpendicular to their edge, but is much less pronounced.

The second set of Far Lands (henceforth named the "Farther Lands") generate when X/Z coordinates reach about ±1,004,065,811 (or 623,897.614 miles), which is about 80 times farther than where the first set initiates, at ±12,550,821. The terrain is similar to the first set of Far Lands, but is more stretched out. They also have Edge and Corner types, which are described below. 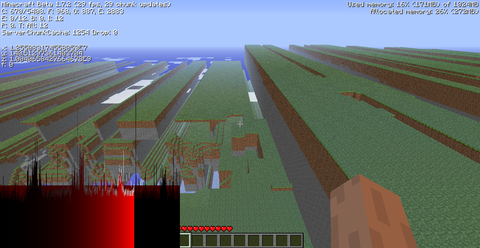 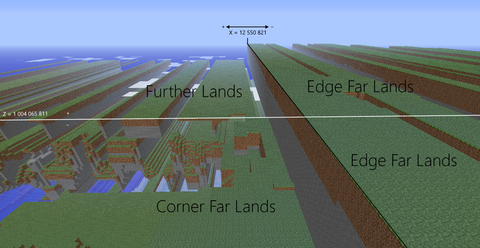 The same location as above, but with captions. 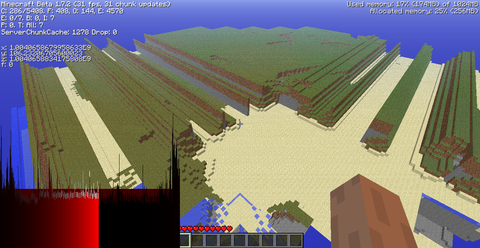 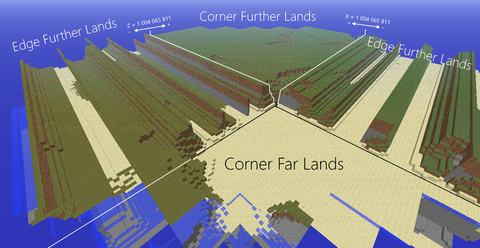 The same location as above, but with captions.

From the red line to the right, the Edge Far Lands start to combine with the Edge Farther Lands, creating a hybrid mix.

Like the Farther Lands, at about ±80 times further from the initiation first set, the third set of Far Lands (furtherer from Far Lands, henceforth named "Fartherer Lands") generates once X/Z coordinates reach ±80,325,273,600 blocks away. Fartherer Lands generates past the chunk overwrite limit (X/Z: >±34,359,738,368) and the block rendering limit (X/Z: >±2,147,483,647), thus it is impossible to see Fartherer Lands in game without modifying the noise scale.

These generate 80 times farther away than the Fartherer Lands, and are a result of selector noise overflowing at the 64 bit limit.

The most noticeable side effect of the Far Lands, where the map takes longer to update according to the player's location.

Players experience extreme frame-rate drops and very high CPU usage, which continue until Minecraft freezes completely. The frame-rate drops do not occur in multiplayer servers, though the server itself lags depending on the server computer's RAM. In both single-player and multiplayer, the intense lag that is characteristic of the Far Lands is caused by massive numbers of falling sand or gravel entities. This in turn is caused (like most of the rest of the Far Lands' strange effects) by more floating-point precision errors, and worsens as the player reaches X/Z: ±32,000,000 (because after X/Z 32,000,000 blocks, the terrain no longer generates. Only air blocks that have the same textures as the surrounding terrain generate). Lightning bolts that hit surfaces at the top of the map (Y-coordinate 127) are invisible and do not cause a fire. The particles created when rain hits these surfaces are black instead of blue. Snow does not accumulate on these surfaces either (because there is no space) unless a top layer tunnel peeks out. 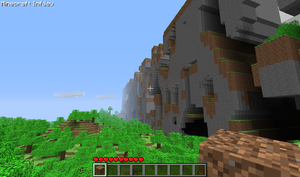 The Far Lands in Minecraft Infdev 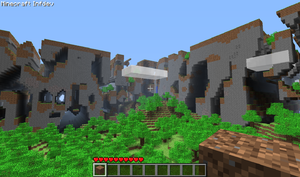 In Indev (the release of January 30, 2010), there are many limits that can be experienced when traveling beyond the world limit. 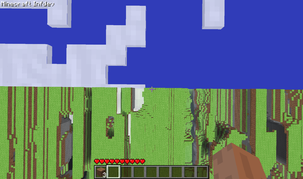 On the February 27, 2010 version of Infdev, many side effects would occur as the player walked thousands or even millions of blocks away.

On the March 27, 2010 version of Infdev, terrain generation changed and the Far Lands began generating at X/Z ±12,550,820. The original shape of the Far Lands was different from Beta 1.7.3, and changed many times as the terrain generator changed. In this version, the Far Lands were more smooth and thick and had less rough edges. However, as the terrain became less thick over time, the Far Lands became more thin and sharp. Though the Far Lands existed in these versions, many of the side effects from before did not appear. However, fire particles and doors would act strangely. There was no stuttering movement, and beyond X/Z ±32,000,000, the blocks would simply not generate. Walking off the edge would cause the player to become stuck in a glitched position, unable to escape. 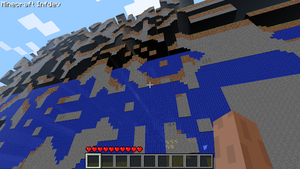 Far Lands from beyond 32,000,000 X/Z. Blocks are no longer solid and the player would fall into the Void. After some time the game freezes.

In previous versions of the game, if the player teleported as high as they possibly could, they were sent to a Y-Axis of 3.4x1038. In this zone, the player floats without a purpose, and dropped items that slide with what appears to be no friction before suddenly stop after about 20 blocks. It has been reported that the X and Z-Axis sometimes flicker randomly in this zone. The memory pie chart also sometimes randomly jumps to 100% undefined memory usage, and then disappears upon re-entering the debug menu. 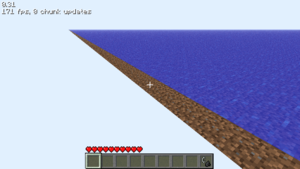 Coordinates X/Z ±2,111 on the Indev version released January 30, 2010. Blocks no longer render past this limit.

The Far Lands of the Nether and Sky Dimension share characteristics of the Overworld Far Lands, although with some differences. 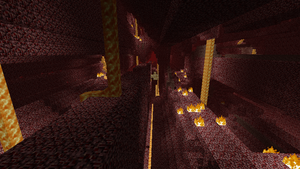 The Far Lands as seen inside the Nether.

The Nether Far Lands are similar to the Overworld Far Lands, except generated with Nether terrain features, with a lava ocean at Y=31.

In the Nether, the terrible lag associated with the Overworld Far Lands does not occur; most of the Nether is already dark enough for spawns in the first place, and there are fewer gravity-affected blocks (no sand, and gravel is rare).

The Far Lands do not generate above the bedrock ceiling, even if the Far Lands are modded into a more recent version.

The Sky Dimension similarly has no trademark liquid and generates no water/lava, and also no bedrock generates. They appear squashed similarly to those of the End.

The Sky Dimension Far Lands appears just like the End Far Lands, but with Overworld features.

This is also the area where the player is most likely to find diamonds. In any other area, the islands do not spawn low enough for diamonds to spawn. The Sky Dimension Far Lands do spawn all the way to Y: 0, so the player can find rare ores inside the Far Lands.

It was fixed by taking the remainder of the input divided by 224. Noise repeats every 28 units anyway, so it has no side effects. However, it does prevent the overflow. By removing these instructions, the Far Lands can be returned to current versions of the game.[4]