The X/Z Far Lands were fixed in Beta 1.8, so they do not exist without modifications to Minecraft. In addition, most of the distance effects were fixed. The Y Far Lands were not fixed, but cannot be created in Vanilla 1.13 and above.

On the X and Z axes, the Far Lands and Farther Lands initiate as they did previously, with an identical chance of offset at positive positions. However, they are actually 256 blocks tall, instead of 128. There is a world border at the 32-bit integer limit.

On the Y-axis, the Far Lands initiate at around twice the former number, which is therefore ±25,101,648. Since blocks cannot exist above y=256 or below y=0 in the vanilla game, to observe the Far Lands in their natural place, mods such as the Cubic Chunks mod must be used to allow terrain to generate in such positions.

Farther Lands also generate at ±2,008,131,840 on the Y-axis, however, they cannot be generated without lowering the selector noise period. 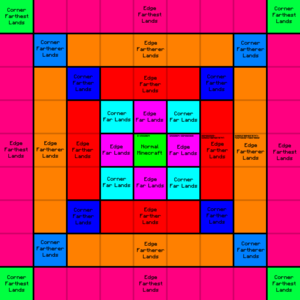 The edge Far Lands and corner Far Lands, as well as their Farther variations, generate relatively identically to their pre-Beta 1.8 counterparts, but utilizing the entire height limit, causing them to generate all the way up to y=256, or in the case of infinitely high worlds, until they reach the sky Far Lands at y=+25,101,648 (and equivalently the void Far Lands at y=-25,101,648). 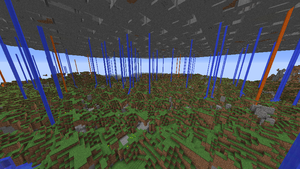 The Far Lands generating on an unmodded modern custom world, before 1.13. A high coordinate scale was also used to generate this, resulting in repetitive terrain.

The Far Lands generate at positive values of the Y-axis past y=25,101,648. Monoliths generate up to this point if the player can get them to generate. 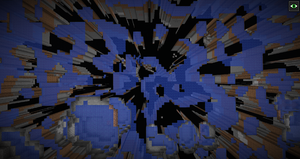 The Far Lands generating underground on a modded world.

These do not seem to be obtainable without using mods in the same way as the Sky Far Lands.

Since every air block outside of caves and other generated structures is replaced with water below y=63, the void Far Lands are filled with water.

When the Sky or Void Far Lands meet with the vanilla Corner Far Lands, many interesting terrain features can be sighted. The content of these intersections appears to vary throughout worlds, with some being completely blank, some completely solid, and some generating like regular Far Lands material. In some cases, exciting diagonal patterns with large absent chunks generate.[2]

A command-summoned TNT's explosion at 1,500,000,000 on both X and Z axis. The white and black smoke particles spawn in two different locations and different from the location of the TNT, due to floating-point precision errors.

Even in modern versions of Minecraft, the floating-point precision errors still exist, but only with entities. Mobs spawn and move along grids, which has the cell edge length double at every power of two on the corresponding axis. They tend to move to the nearest intersection of two perpendicular lines of the grid. Other entities and particles (except items, certain entities, and particles spawned with commands) are also spawned on that grid; for example, an ignited block of TNT is "snapped" into another location on the grid.

In vanilla Minecraft 1.14, the lighting system ceases to work beyond 2^25 (X/Z ±33,554,432) (though this distance is available only via editing source codes), however, it isn't like what would happen beyond X/Z=32,000,000 in older versions. Instead, everything abruptly becomes absolutely dark and ignores light sources. The chunks, however, are still solid and block physics still function. Night Vision can help to counteract the visual darkness; it is currently unknown whether the Conduit Power effect works or not.