From Minecraft Wiki
(Redirected from Eye of ender)
Jump to: navigation, search
Eye of Ender 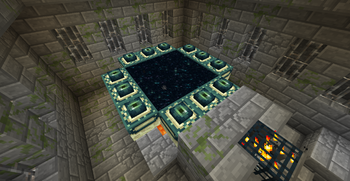 An End Portal activated with Eyes of Ender.

Once an end portal is found, eyes of ender are required to activate it. End portals require a total of 12 eyes of ender in order to activate, though each individual frame block has a 10% chance of containing an eye of ender when generated. Eyes can be placed in empty End portal frames by pressing use on them until the entire ring of 12 is filled, thereby activating the Portal. Due to the fact that there is a 10% chance of each individual End portal frame having an Eye in it, there is a one out of one trillion chance of every frame having an Eye in it thereby activating the portal even if you have no eyes of ender.