An explosion is a physical event, generally destructive, that can be caused by several different circumstances. It can destroy nearby blocks, propel and damage nearby players, entities, and their armor, and cause one or more fires under correct circumstances. Explosions produce a "shockwave" particle effect.

Multiple close explosions may propel objects further, but have no cumulative effect on the destruction of a block. This is because explosion damage to blocks is evaluated individually (per explosion), and blocks' blast resistance do not become "weakened" from previous explosions.

The propulsion effect of explosions is often used for TNT cannons, and can also be used to shoot out gravity affected blocks.

Despite doing damage to entities, fireworks do not destroy terrain and as such are not counted as conventional explosions.

Cauldrons perform a non-terrain-damaging explosion when incompatible liquids are mixed.‌[Bedrock Edition only] 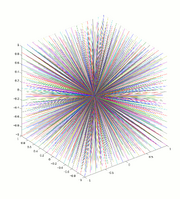 The rays from the explosion center to points that are uniformly distributed on the surface of a cube centered at the explosion with an edge length of 2. (However, this defines only their directions, not their length).

The roughly spherical pattern of blocks destroyed can be seen here.

An explosion can destroy nearby blocks. Its blast effect is evaluated independently on many explosion rays originating from the explosion center, as shown in the right figure.

An explosion must be powerful (power ~1542860[verify]) to destroy a bedrock block.

From the above process, the following results can be deduced (where

is the floor function):

Destroyed blocks have a 1⁄p chance of dropping as collectible resources, where p is the explosion power. So, blocks destroyed by an (uncharged) creeper's explosion have a 1⁄3 chance of dropping. However, dragon eggs, beacons, conduits, heads and shulker boxes always drop from explosions, though the items may be destroyed by subsequent explosions. In addition, explosions from TNT and minecarts with TNT cause a 100% drop rate.‌[Java Edition only]

From the above process, the following results can be deduced: 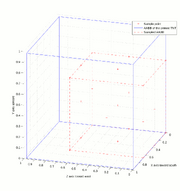 A primed TNT AABB has directionally asymmetrical sample points (1/2.96 spacing) because of rounding.

The approximation algorithm has sampling error that results in directional asymmetry of propulsion. For example, a typical TNT cannon has maximum range in the west direction partly because the primed TNT has largest sampled exposure in that direction.[verify]

If the explosion has the ability, it randomly starts fires in ⅓ of all destroyed air blocks that are above opaque blocks.

In addition to the initial lag from processing the explosion, which subsides once the explosion has occurred, there can also be a prolonged fallout from an explosion, that consists of dropped items, liquid physics, and increased render-complexity of the crater. Technically, the dropped items disappear after 5 minutes, however those 5 in-game minutes may take a long time to process during extreme lag.

The player receives damage, if within these radii of a 100% exposure ground 1 block, 2 blocks, or 4 blocks of TNT explosion, with the amount of damage labeled on each circle in the figures below.