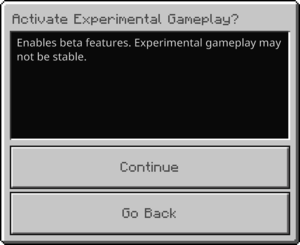 The disclaimer that appears when toggling Experimental Gameplay in a world.

Experimental Gameplay is a game option exclusive to Bedrock Edition. It allows the player to test some unfinished or work-in-progress features, but toggling it allows players to have an early look.

Experimental Gameplay is found in the world options when creating a world. Turning the option on does not disable achievements, however it can't be redisabled when it is and the world is created. Enabling it on an already existing world makes a copy called "[EX] World Name". The original world without experimental gameplay can still be played, although progress does not transfer through the two worlds.