From Minecraft Wiki
(Redirected from Evokers)
Jump to: navigation, search 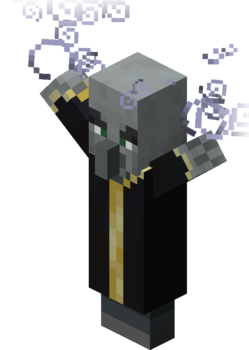 On Hard difficulty, up to 5 evokers spawn during raids, starting at wave 5. During these events, they can be a raid captain.

Like shulkers and vindicators, evokers are passive on peaceful difficulty.‌[Bedrock Edition only]

The evoker typically summons its fangs in a straight line toward the target, but if the target is close enough to the evoker, the evoker summons them in 2 circles around itself.

The evoker signals this attack by producing white particles () and a higher-pitched horn-like sound. Three vexes appear nearby. The evoker can summon vexes as long as there are fewer than 8 vexes within 16 blocks centered on the evoker.

This spell resets the evoker's spell cooldown to 5 seconds, and resets the cooldown for summoning vexes to 17 seconds.

The particles of the spell has shown on the evoker when there are raids and that they change every time the spell is different (needs game testing).

The particles also show up in their body rarely in raids only. When they walk, it stays with them forever[needs testing]

Evokers have entity data associated with them that contains various properties.

Evoker fangs have entity data associated with them that contains various properties.