From Minecraft Wiki
Jump to: navigation, search
For the miniboss in Minecraft Dungeons, see MCD:Evoker.
Evoker 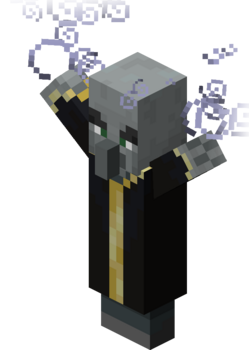 Evokers can spawn during raids by themselves or riding Ravagers.

Evokers attack players, villagers or baby villagers,‌[BE only] iron golems, snow golems‌[BE only] and wandering traders within 12 blocks. They are neutral toward every other mob except illagers.

Like shulkers and vindicators, evokers are passive on peaceful difficulty.‌[Bedrock Edition only]

The evoker typically summons its fangs in a straight line toward the target, but if the target is close enough to the evoker, the evoker summons them in 2 circles around itself.

The evoker signals this attack by producing white particles () and a higher-pitched horn-like sound. Three vexes appear nearby. The evoker can summon vexes as long as there are fewer than 8 vexes within 16 blocks centered on the evoker. The vex can pass through blocks and do a surprise attack.

This spell resets the evoker's spell cooldown to 5 seconds, and resets the cooldown for summoning vexes to 17 seconds.

This article may need cleanup to comply with the style guide. [discuss]
Please help the Minecraft Wiki clean up this page if you can.
The talk page may contain suggestions.
Reason:

Evokers have entity data associated with them that contains various properties.

Evoker fangs have entity data associated with them that contains various properties.