This article documents an April Fools' joke.
This feature was exclusively part of a joke version and is not currently planned for addition to regular Minecraft.
It is documented here on the wiki due to being officially-released content by Mojang Studios, even if not present in a final version.
Etho Slab 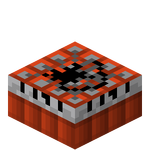 The Etho Slab was a joke slab introduced exclusively in Java Edition 2.0. It is a reference to the YouTube channel EthosLab.

Punching the block breaks it instantly and it drops in item form.

Etho Slabs behave like TNT,[check the code]; they explode when activated by either redstone or burning. They spawn anvil blocks above the player when exploding.[more information needed]

Blocks with data value 1 are called "Etho Slab (Lit??)" and explode on punch.