From Minecraft Wiki
(Redirected from Entities)
Jump to: navigation, search 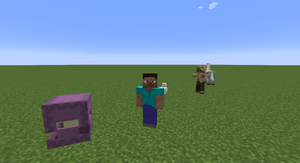 A player standing in front of a large group of entities 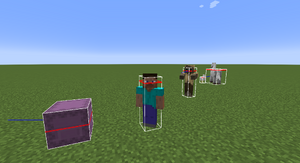 The hitboxes of several entities. Note the blue line that points to the direction the entity is "facing."

Entities encompass all dynamic, moving objects throughout the Minecraft world.

All entities have these properties:

Most entities can be pushed around by water currents, and some (e.g. arrows) can have their trajectory altered by explosions if already traveling at speed. Some entities can be renamed by using a name tag on them.

Entities cannot pass through solid blocks. Most types of entities prevent blocks from being placed in the space they occupy, except for resources (dropped items) and experience orbs, which are automatically pushed out of the block to open air. Also, if an entity does overlap a block, (due to falling sand or a door being swung), then it is free to move out of the solid block but not back in. (For example, if a door is closed on you, you can jump up and stand on top of the bottom-half door block, if there is air above the door.)

Entities are lit according to the light level of the block their position is in. For example, if a minecart runs over a non-straight track directly into a solid block, it turns black because solid blocks always have a light level of 0; arrows are also sometimes seen to turn black, especially if fired shallowly into the ceiling.

Item frames, paintings, and lead knots are unique in that, although they are entities, they align to the block grid and are completely immobile.

Arrows, TNT and falling sand (and its variants) are assumed to have infinite health because they are not destroyed by explosions (although they can be moved by explosions, and they can also be fired out of TNT cannons), nor by being on fire for long periods. However, they can still be "killed" with the use of the /kill command.

When a block is placed on an entity, It causes the block to despawn.

Boats and minecarts appear to recover health over time. For example, they can be broken by hitting them quickly, but cannot be destroyed by hits with unarmed hand with a pause after each hit. The amount of wobbling displayed by boats and minecarts when struck appears to indicate their current health. All minecart and boat variants have 6 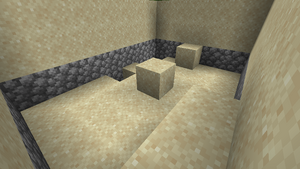 Falling sand that collapsed into a dungeon.

A gravity-affected block normally exists as a block, but when its support is removed, it becomes a falling (object) entity and falls down until hitting another object, at which point it places itself as a block at the nearest on-grid position, or becomes an item if that position is occupied by a non-solid block (such as a torch). The only exception is the anvil, which deletes any non-solid block it lands on. This glitch can be used to break bedrock and other blocks that cannot be mined in survival mode.

While these blocks ordinarily fall straight down, their trajectory can be redirected by explosions, soul sand/magma blocks in water, and pistons with slime blocks. It is also possible to modify the velocity and direction of falling sand by using commands or third-party programs. A gravity-affected block despawns or drops as an item if it does not land after falling for 30 seconds, or 5 seconds if falling into the Void.

Interactions with "use" control[edit]

Entities with use interactions (such as boats, minecarts, cats, villagers, tamed parrots, and tamed wolves) do not stop the use action of a tool you are holding. For example, using a water bucket on a tamed wolf causes the wolf to sit, but also empties the bucket near or onto the wolf. 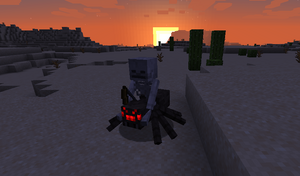 Entities may be riding on, or attached to, other entities. When this is the case, only the lower/"outer" entity's volume collides with other things, and only that entity can control movement.‌[Java Edition only] However, there are exceptions: players riding minecarts, boats or saddled horses, baby zombies riding chickens, and skeletons riding horses or boats. The only current legitimate combinations of riding entities are:

It is possible to have multiple levels, such as two parrots on the player's shoulder who is riding a pig in a minecart.

Entities can also be stacked on top of each other with the use of the /summon and /data commands. For example, using /summon spider ~ ~ ~ {Passengers:[{id:skeleton}]} summons a spider jockey.

When a block is placed on an entity, It causes the block to despawn.

The table below lists types of entities that currently exist in Minecraft.

Entities listed as "solid" obstruct the passage of other entities.

The size is in block lengths (measured in meters; note that 1 block is 1m3), and is the size of an axis-aligned bounding box with the specified width in both horizontal dimensions (X and Z) and the specified height in the Y dimension. This box does not rotate when the object rotates visually.

Gravity works differently in Minecraft than the real world, as not everything is subject to the same acceleration. Additionally, there is a drag force proportional to velocity, again dependent on the entity.

Issues relating to "Entity" are maintained on the bug tracker. Report issues there.