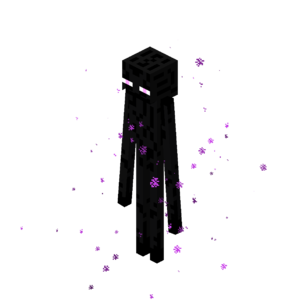 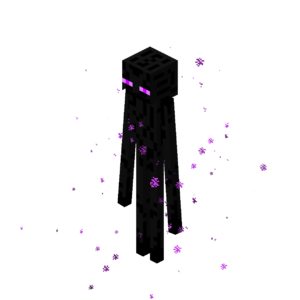 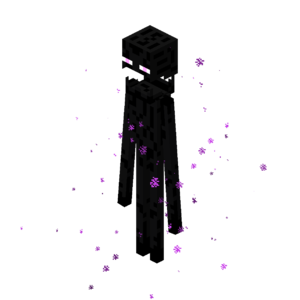 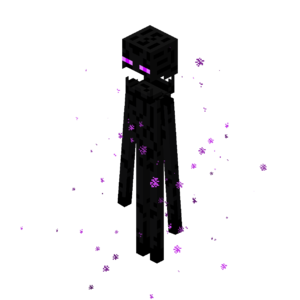 Endermen are tall, black neutral mobs from the End that have the ability to teleport, and pick up blocks. 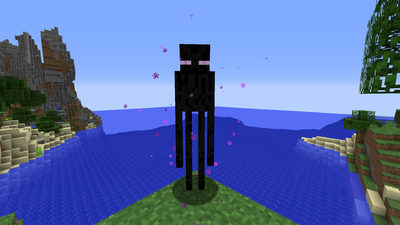 An enderman in the Overworld.

An enderman can spawn at light level 7 or less, on any solid surface having at least three empty spaces above. They spawn in all dimensions.

Endermen spawn 1-2 at a time in the Overworld except in mushroom fields, mushroom field shores, rivers, frozen rivers and legacy frozen oceans.

Endermen also spawn in groups of 4 in the End.

Endermen do not attack unless provoked by a player or mob attacking them or looking at their body or head from up to 64 blocks away. When provoked, endermen open their mouths, shake with rage, and frequently make screaming sounds; when provoked by being stared at, they also make a lengthy, loud, threatening sound. If the player maintains eye contact, the enderman does not run, although it may teleport away. Once the player stops looking at the enderman, it runs toward the player to attack. If an aggravated enderman is hit by another player or mob, it ceases attacking its original victim.[2] Endermen even attempt to retaliate against the ender dragon if the dragon hits a group of endermen. An aggravated enderman may also teleport to the location of a player or mob up to 4 chunks away.

They can also step up one full block without having to jump.

Endermen are damaged by melee attacks, water, splash water bottles, and rain, and teleport away when they take damage from any of these (1

every half second for water and rain, and 1

for splash water bottles). They repeatedly teleport until they find a dry location. However, endermen do not take damage while standing in a filled cauldron. They also teleport if they take damage from other sources such as suffocation, fire, lava, poison, or the wither effect. Range attacks are ineffective against endermen because they simply teleport away before the projectile hits.

Endermen pursue the player until they are either killed or become distracted by exterior elements like rain, fire, or sunlight (they do not take damage from sunlight like undead mobs); they are likely to teleport away to underground locations, such as caves, mineshafts, and strongholds, at daybreak. An enderman (whether neutral or aggravated) in a player's vicinity prevents the player from sleeping in a bed at night as if any hostile mob were nearby. If the player is already asleep in a bed, it is possible for an enderman to teleport on it and knock the player off, although the player continues sleeping.

Endermen attempt to kill endermites, provided they were spawned from ender pearls. Endermen can spot endermites from a distance of 64 blocks, the same distance as a provocative player.

When an enderman is under the Invisibility effect, the enderman's eyes are still visible in Java Edition.

When teleporting, for each attempt a random destination is chosen within 32 blocks along each axis (i.e. a 64×64×64 cuboid centered on the current position). It then seeks downward (regardless of distance, sometimes de-spawning itself) from the chosen destination until the block below is made of a movement-blocking material. The teleportation attempt succeeds if no liquid or solid blocks prevent them from standing at the destination. Thus endermen need at least three non-solid blocks above the destination to successfully teleport. Endermen never teleport into waterlogged blocks. Exceptions are carpet that is not above a block made of a movement-blocking material and snow layers stacked 10 deep or more, as their materials are not flagged as blocking movement even though the blocks themselves do so.

Endermen always attempt to teleport upon taking damage, such as from water. Most ordinary melee attacks are successful but are usually followed by an immediate teleport to a few blocks behind the attacking player. When directly attacked by the player, endermen have a chance not to open their mouths. Endermen cannot normally be attacked with projectiles in Java Edition (including splash potions of harming), as they always teleport away just before being hit, unless they are in a boat or minecart. However, they do not teleport if positive potions are thrown at them, including splash potions of regeneration and strength, and do not teleport away from poison potions either. A splash water bottle deals 1

damage to an enderman if it is caught in its radius of effect. If all available blocks within teleport distance are removed or unable to be transported to, it is possible to hit endermen in Java Edition with a projectile, though arrows may bounce off dealing no damage on occasion. When teleporting due to damage, an enderman can make up to 64 attempts to teleport.

An enderman cannot teleport while it is in a minecart or boat, although in rain and water it attempts to do so, always teleporting back repeatedly until death. This does not occur in Bedrock Edition.[3]

Endermen do not teleport in the daytime while on soul sand unless they are damaged. They also do not teleport if attacked on their legs or by wolves, as wolves attack at the legs. Endermen also hardly teleport when combating other mobs like iron golems.

They play a sound exclusively at the teleportation destination.[4] 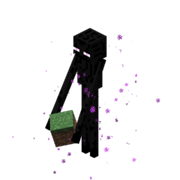 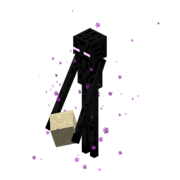 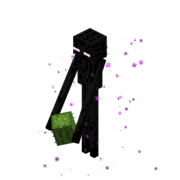 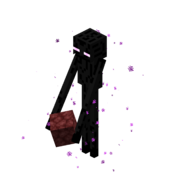 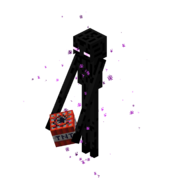 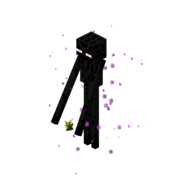 Endermen have a unique ability to pick up certain block types and move them around. They silently[5] pick up blocks in a 4×4×3 region horizontally centered on the enderman and vertically at the same level as the enderman itself. One side effect of this is that an enderman cannot pick up blocks in a completely flat area. Endermen drop the block they are holding upon death as an item, though they do not visually let go of the block when dying.[6]

Endermen can pick up the following blocks:

Data packs can change this list by modifying the minecraft:enderman_holdable block tag.‌[Java Edition only]

While endermen may breach walls, bridge fences, break redstone circuitry and even construct golems by removing or placing blocks, such actions are entirely random and not purposeful.

One can summon an enderman holding any block (including the ones not listed above) using the carriedBlockState NBT data.

For example, to summon an enderman holding Netherrack with no AI where players are standing:

Endermen have entity data associated with them that contain various properties of the mob.

Issues relating to "Enderman" are maintained on the bug tracker. Report issues there.