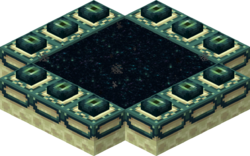 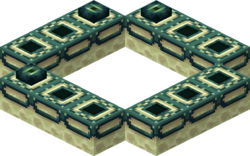 This article is about the structure used to travel to the End. For other uses, see End portal (disambiguation).

Upon placing an eye of ender in every end portal frame block of a specific portal, the portal activates, creating 9 end portal blocks inside the frame, and allowing the player to access the End. The portal blocks still operate if the frame is destroyed. In Creative mode, the player can create their own portal but it activates only if all of the end portal frames were placed with the front-facing inward, i.e. placed with the player standing inside the ring and directly in front of the frame they are placing. The eyes cannot be removed from the portal.

End portals are found within the portal room of a stronghold, hanging horizontally over a pool of lava, with a staircase leading up to the portal. A silverfish spawner sits in the staircase. Each individual frame-block has a 10% chance of containing an eye of ender. This means that there is a one in a trillion chance for all 12 end portal frames to contain an eye of ender, activating the portal upon initial generation. The frame has the highest probability of generating containing only one eye of ender (37.7% chance), with chances dropping to 28.2% for zero, 23.0% for two, 8.52% for three, 2.53% for four, or a total of 0.433% for five or more.

Stepping into an activated end portal immediately opens up a loading screen, and transports the player to the End - this leaves no time to back out, unlike the nether portal while in Survival mode. Upon entering the End, a 5×5 horizontal platform of obsidian is generated centered at block coordinates (100, 48, 0), and the player is placed on top of it (100, 49, 0, towards west).

Entering an end portal does not reset falling velocity. If a player had fallen far enough to die before hitting the portal, the player dies upon arrival in the End ‌[Java Edition only].

The black portal blocks emit a light level of 15, which is as powerful as glowstone and is the brightest light level in game. It only takes one block of portal to teleport to the End. Portal blocks can be placed anywhere through the use of the /setblock and /fill commands and they function as if they were a complete portal.

Activating the end portal destroys any blocks located in the center 3×3 square, even destroying bedrock or another end portal frame. It destroys fluids, although if the source block is not also removed, then it immediately flows back through. If an exit portal is generated on a spawner, the fire particles remain. The destruction of the blocks does not make any sound, and applicable blocks do not drop as resources (exceptions being the top part of a door or the extended part of a vertical piston, which both destroy the whole object and drop them as resources), and events sometimes triggered by block destruction fail to occur: TNT simply disappears without detonating, and infested blocks fail to spawn a silverfish. However, containers still drop their contents. Mobs (except the wither and ender dragon) enter the portal similar to the player. If the player rides a minecart into an active end portal, the player enters the End only after exiting the minecart.