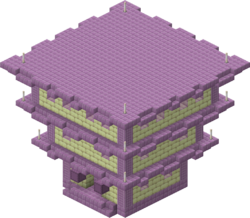 End cities are castle structures found on the outer islands of the End. They are inhabited by shulkers and hold among the most valuable loot in the game.

End cities usually generate in flat areas, in "midlands" or "highlands" biomes, which are found on larger islands. They are uncommon and generate on random islands. One may find several cities clustered together, or travel for thousands of blocks before finding one.

End cities consist of tall skyscraper-like towers constructed out of end stone bricks and purpur blocks. An end city may generate as a single tower by itself, or as a sprawling complex of inter-connected towers and pathways branching from a main tower. End rods and Ender chests are the only source of light. Many shulkers spawn around the city, and guard its various treasures. Decorative banners hang at the tops of some towers. 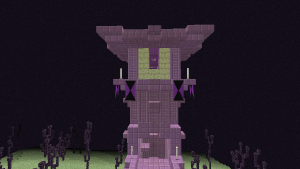 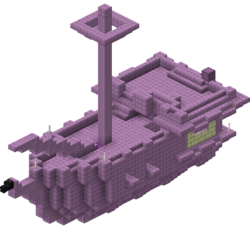 Each direction of every tower of the end city has a 50% chance of generating a bridge, and the bridge itself has a 12.5% chance to generate an end ship. On average, 6.25% of end cities (or 1 out of every 16 end cities) include a ship. An end city cannot have multiple ships.