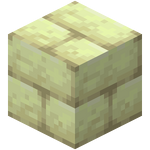 End stone bricks can be mined using any pickaxe. If mined without a pickaxe, it drops nothing.

End stone bricks can be found naturally as part of the structure of end cities.

Issues relating to "End Stone Bricks" are maintained on the bug tracker. Report issues there.