From Minecraft Wiki
Jump to: navigation, search
This article is about the block. For the structure, see End Portal.
End Portal Frame 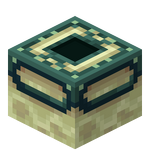 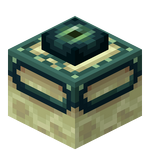 An end portal frame[a] is a block that resembles end stone with a decorative bluish-green top, with sides decorated in hollow rounded rectangles with the same color as the top.

The end portal blocks, like bedrock, are indestructible in Survival or Adventure mode. It can be obtained only by accessing the creative inventory or commands. They can also be retained from worlds played in versions where they were legitimately obtainable.

There is an extremely low chance (10-12 or 10-10% or one in a trillion) for all twelve end portal frames to be filled in strongholds.

The chart below shows the probability of having each number of eyes of ender filled in (some values may be rounded).

Using eyes of ender on end portal blocks inserts them to the top of the blocks if it is not inserted previously.

An end portal frame has a front face that faces the player when placed. Although the facing is almost invisible (one can distinguish only 2 rotations of end portal frames), all end portal frame blocks must be placed correctly and face inward in order to be able to activate the end portal, and if all of the frame blocks have eyes of Ender inserted, the portal activates, replacing the inner 3×3 space with end portal blocks.

In the End the end portal blocks teleport entities back to the Overworld, so entering an activated end portal in the end transports the entity to the overworld instead.

End portal blocks output a redstone comparator signal of 15 when an eye is present. If there is no eye in the frame, it outputs a signal of 0.

End portals can be placed under note blocks to produce "bass drum" sound.

The bottom two bits determine which "side" of the whole portal frame this block is a part of. To make the frame activate, each of the portal frame blocks in the pattern must "face" toward the middle. Since the image is near-symmetrical, it is difficult to tell which direction an individual block actually faces, but if the block isn't facing in that direction and that is the last frame block where the Eye of Ender is placed, the frame does not activate.

Direction vectors for the blocks are the following:

Issues relating to "End Portal Frame" are maintained on the bug tracker. Report issues there.