An end crystal is both an item and an entity found in the End.

End crystals are found atop the many obsidian pillars in the End. Two of them are protected in "cages" of iron bars. All end crystals respawn one by one immediately before respawning the ender dragon.

Their primary purpose is to recharge the health of the ender dragon, who gains a charge from the nearest crystal within a cuboid extending 32 blocks from the dragon in all directions. The dragon is healed 1

each half-second. If multiple ender dragons are spawned, an end crystal can affect multiple dragons at the same time. The healing beam is neither obstructed nor is its power diminished by entities or blocks. 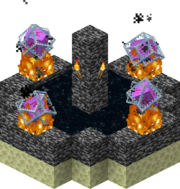 How to arrange end crystals on the exit portal to respawn the ender dragon.

As items, end crystals may be placed on bedrock and obsidian, if the two blocks above the bedrock or obsidian block are air or replaceable blocks and no other entities intersect the area. If four are placed on the end exit portal, one on each of the flat sides, the crystals respawn the original end crystals on the obsidian pillars, as well as resurrect the dragon itself, before exploding. The top of each pillar also explodes, destroying any player-placed blocks. This happens even if TNT explosions are turned off in settings.

End crystals explode when attacked or damaged in most ways, even by attacks that normally do zero damage. They are not affected by exploding fireworks, and if damaged by an explosion, they disappear instead of exploding. The end crystal's explosion has an explosion strength of 6, the same as a charged creeper. Any ender dragon charging from the crystal when it is destroyed takes 10

Although an ender dragon damages most blocks and entities in its path, it cannot destroy end crystals simply by going near them.

The end crystal naturally shoots a beam at the ender dragon and heals it when the dragon is within range. This beam can be manually created using the command /data merge entity @e[type=end_crystal,limit=1] {BeamTarget:{X:0, Y:0, Z:0}}. The beam can be pointed in any direction, allowing to mark locations or objects.

The base appears to be made of bedrock, with a crystal hovering over it. While in the End, a crystal continually generates fire at its current position, one block above the base (directly on top of the block the base is embedded in), replacing any other block at that location. This fire is not capable of spreading.[verify] The end crystal entity is not solid and can be walked through freely.

End crystals can be pushed by pistons, but they explode if moved while in live fire.

End crystals have entity data that define various properties of the entity.

Issues relating to "End Crystal" are maintained on the bug tracker. Report issues there.