An enchanting table[a] is a block that allows players to spend their experience point levels to enchant tools, weapons, books and armor.

It cannot be moved by pistons. If an enchanting table is placed on ice, the player slides on it as though it is an ice block, just like with slabs.

Three to five words are chosen from the list and appended to each other, then displayed in the Standard Galactic Alphabet. The words chosen are random and purely cosmetic: they have no relation to the enchantments to be applied to the item and are not saved on the enchanted item (meaning they say nothing about the spell's identity), and they are displayed only in the enchanting table. Only the cost and one of the enchantments is known.

By default, the GUI of an enchanting table is labeled "Enchant", but this name can be customized by naming the enchanting table in an anvil before placing it, or by changing the CustomName tag using the /data command. 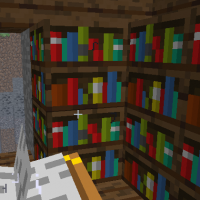