Emotes are a part of the character creator that allows players to perform animations.

The character creator includes emotes. Several emotes are available for free, purchase, and as achievement rewards. The player can "equip" up to 6 of their emotes at a time. When in a world, pressing B, or

on Xbox One controllers,

on PlayStation 4 controllers, or tapping

button on the top of the screen opens the emote menu. The player can then click on an emote to perform the animation. 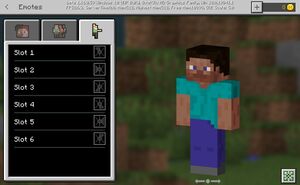 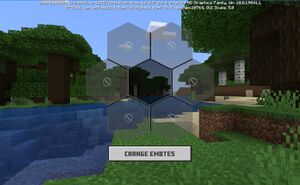 These animations are available as of Bedrock Edition 1.16.1:

These animations were shown at MINECON Live 2019[1]: