From Minecraft Wiki
Jump to: navigation, search
This article is about the item. For the currency in Minecraft Dungeons, see MCD:Emerald. For the skin, see MCD:Emerald (skin). For the ore, see Emerald Ore. For the mineral block, see Block of Emerald.
Emerald 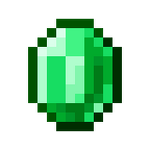 Emeralds are rare minerals, and are used to trade with villagers or to power beacons. They are obtained from emerald ore, which is the rarest ore in Minecraft.

Emeralds can be obtained by trading with villagers, since they are the currency that villagers use for trading. Villagers either buy or sell specific goods for emeralds.

This section's factual accuracy may be compromised due to out-of-date information.
Please update this section to reflect recent updates or newly available information.

Vindicators and evokers drop 0–1 emeralds upon death. Looting increases the maximum emerald drop by one per level, for a maximum of 4 emeralds with Looting III.

In Bedrock Edition, with Looting III, it is possible for a vindicator in a raid to drop up to 16 emeralds upon death (vindicator drops + raid drops + an additional drop).

Emeralds are primarily used as currency for trading with villagers and wandering traders. Trading is typically a faster way to obtain emeralds than by mining, as emerald ore is rare.

Emeralds can be used to select powers from a beacon. The player must select one of the available powers and then insert an emerald into the item slot.

An emerald can be substituted for an iron ingot, a gold ingot, a diamond or a netherite ingot.

Issues relating to "Emerald" are maintained on the bug tracker. Report issues there.