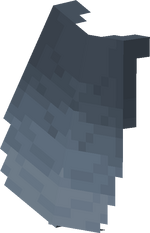 /ˈɛl ɪ trə/ ᴇʟ-i-trə) are rare wings found in end ships that are the only single-item source of flight in Survival mode.

Elytra are found only in end cities in item frames in the treasure room of the end ship. A shulker guards the elytra and the ship's two loot chests. 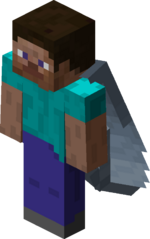 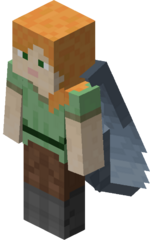 Elytra are equipped in the chestplate slot, either by placing the item directly in the slot, by pressing use item while held in hand, or by firing a point-blank dispenser at a target. They are gray in color by default, but they adopt the design of any cape the player is wearing. They maintain their in-world texture design even when they're broken or enchanted.

To fly, the player must press the jump key while falling, and the elytra spread apart like a beetle's elytra. The player can aim their view around to turn or adjust their pitch. Losing altitude increases speed, and gaining altitude decreases speed. Firework rockets can be used to increase speed. Another flight method is using the Riptide-enchanted trident. Additionally, speed is quickly lost from sharp changes in direction.

Directly hitting any surface while gliding too fast causes damage proportional to flight speed (although this may be calculated from another factor). The player does not take fall damage from colliding at a shallow angle or a low enough speed. The critical, damaging angle is about 50° with the collision surface, and the calculation for damage seems to be as if the player had fallen from their maximum potential glide height to the height of the struck surface.

A safe and simple cruise with the highest travel distance can be achieved by aiming directly at the horizon while at the glide's altitude limit. The player's speed is slow enough to allow them time to do other things during a long flight, like sort out their inventory.

In Creative mode or when the "mayfly" ability has been given, the player can alternatively hold the jump key to fly up,‌[Bedrock Edition only] or double press the jump key to move around freely.

Flight can be stopped by pressing the jump key.‌[Bedrock Edition only]

Elytra have a minimum speed of about 7.2 m/s (obtained by gliding at the altitude cap with a strong upward pitch of 30°). If the diver drops to 0 speed, they quickly get accelerated back up to at least this minimum. The diver can increase speed by choosing to descend faster, but afterward, they do not regain nearly as much altitude. In the real world, drag increases with speed, and drag, in turn, slows the aircraft; Minecraft mimics this. To glide from cliff to cliff, a player's best bet is to aim slightly above the horizon.

Sharp turns are a fast way to lose speed. Quicker turns cause greater losses, while gentle movements have small effects. Making a hairpin turn can actually be used for making high-speed landings safe as well as for precise landings on small targets like rooftops. The player aims to glide just above the target, then as they're right over it they immediately reverse directions, then they make readjustments as necessary.

The lowest rate of altitude loss is about 1.5 m/sec, obtained by gliding at the altitude cap with a slight upward pitch (12° or 15°).

To get the best possible glide ratio (and thus the furthest distance out of their altitude), the diver pilot should aim directly at the horizon. This ratio is about 9.47 to 1.

Slow Falling potions greatly decrease your vertical (fall) speed, which also greatly decreases your horizontal speed (clearly, it depends on the vertical fall rate, as one might expect from flight modeling). The net result is that you fly extremely slowly - but your Elytra still takes durability damage at the usual rate (1 durability per second without Unbreaking, etc.). Due to this combination, Elytra plus Slow Falling is largely a novelty that most players won't use. The Feather Falling enchantment does not affect Elytra speed (but can help protect you if you land hard).

It is possible to calculate the glide range by dividing the altitude by tan of the glide angle (altitude/tan(glide angle)). For example, if the player glides from an altitude of 64 blocks above ground with a glide angle of 15 degrees, they can glide for 237 blocks (assume that they are on superflat), since floor(64 / tan(15)) is 237.

Trying for too high a pitch reduces the player's lift. At a pitch of 30° above the horizon, the player has the lowest possible airspeed of 7.2 m/sec. Above that, the player might be considered to be in a stall. Increasing the pitch gets closer to a free-fall, and stalled flight at 60° is enough to cause fall damage. Stalling at 90° is a true free-fall.

Recovering from a stall is done by readjusting to any safe pitch as quickly as the player likes. This can be just changing to look at the horizon.

Firework rockets are used for speed boosts while gliding.

Firework rockets can be used for propulsion during flight by placing it in either hand and using. Using a firework rocket while gliding quickly maximizes the player's speed for a time similar to the rocket's flight duration.

If the rocket is equipped with firework stars, it explodes at the end of its flight, inflicting damage based on the number of stars.

A trident enchanted with Riptide can be used for propulsion as well, but only in water when in the Overworld or The End or it can be used in a biome that has rain, or thunderstorm precipitation.

A bow can also be shot while in mid-air to have a similar powering effect, although the Punch enchantment makes the boost greater.

It is possible to gain altitude during powered flight. This makes it possible to glide for extreme distances and had been used extensively by far lands/World Border challenges.

A broken pair of elytra.

Durability decreases by one point each second when gliding. A pair of elytra has 432 durability, allowing 7 minutes and 12 seconds of gliding time without enchantments, providing more than 10,000 blocks of transport distance. It is possible to apply the Unbreaking enchantment using an anvil and an enchanted book, which affects the elytra, in the same way it does to tools. Unbreaking III increases elytra's flight time to about four seconds per durability point, a total of 28 minutes and 44 seconds.

When the durability reaches 1, elytra stops working until it is repaired, adopting a tattered texture in the inventory. The damage ends at durability 1, so they can never fully break. A pair may be repaired by either using the Mending enchantment, combining two pairs in a grindstone, or combining it in an anvil with phantom membranes. In an anvil, each piece of membrane repairs elytra by 108 durability points, requiring 4 pieces to fully repair them.

Elytra can receive the following enchantments by combining in an anvil:

Issues relating to "Elytra" are maintained on the bug tracker. Report issues there.

Designs that are not listed here have default elytra texture or don't have any.