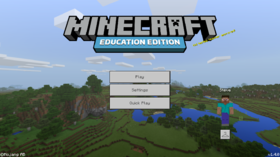 1.4.0 (Windows) or 1.4.1 (macOS) was an update for Education Edition which added most of the Update Aquatic features equating to Update Aquatic (Phase 1) for Bedrock Edition (1.4.0).[2] It is the first version to be released at iOS devices.