A chicken is a common passive mob found in grassy biomes.

Chickens naturally generate in groups of 2-4 on grass blocks[a] with 2 blocks of free space above it at a light level of 9 or more.

5% of spawned chickens spawn as chicks.

They require a light level of 7 or more to spawn.‌[BE only]

Chickens wander aimlessly, chicks also follow adults. When falling, they flap their wings and fall slowly, thus they are immune to fall damage. However, they avoid falling off cliffs. When harmed, they flee around. Chickens uniquely attempt to jump up to climb stairs instead of climbing them normally.[1] They are attacked by ocelots, untamed cats‌[JE only] and foxes. 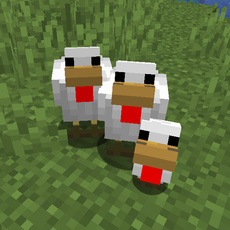 Chickens have entity data associated with them that contain various properties of the mob. 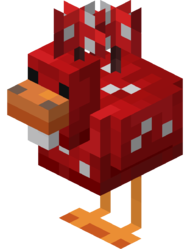 The Cluckshroom in Minecraft Earth.