From Minecraft Wiki
Jump to: navigation, search
This article is about the zombie variant. For the dangerous experience of drowning, see Damage § Drowning.
Drowned 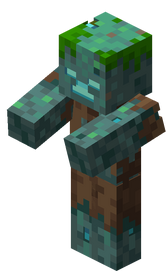 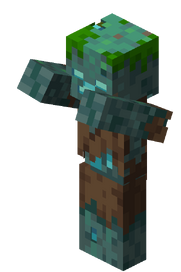 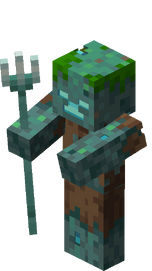 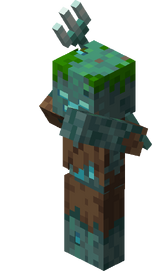 Drowned are common underwater zombie variants that spawn in water or when a zombie drowns. They are also the only source of tridents.

An adult drowned and a baby drowned with a trident.

Drowned spawn naturally at light level of 7 or less in all ocean biomes (except for warm ocean), and river biomes. They spawn at higher rates in rivers than in other biomes.

in Java Edition drowned spawn in groups of 1 inside flowing water or source water that is 2 blocks or taller.[more information needed] In ocean biomes, drowned spawn at Y < 58, or at least 6 blocks below sea level; this restriction does not apply to rivers.

in Bedrock Edition drowned spawn in groups of 2–4 inside flowing water or source water of any depth, but they spawn at higher rates in water that is 2 blocks or taller.[more information needed] They spawn only on the surface, that is, on the highest spawnable block at any given X, Z coordinate; other than that they do not have any specific Y-level spawn limitations. They count toward the monster population control cap and also have their own density caps of 5 in oceans and 2 in rivers.

Drowned have a greater chance of appearing in ruins and cities.

Drowned have a chance to spawn with either a trident or a fishing rod, and occasionally with a nautilus shell. in Java Edition they also have a small chance of spawning while riding a chicken, even after drowning as a zombie, creating a drowned chicken jockey. They are the only zombie variant within the game that cannot spawn naturally with any armor.

Drowned spawn during the generation of certain ocean ruin structures. These drowned do not naturally despawn unless the world is set to Peaceful difficulty.

A zombie converting into a drowned.

If a zombie is not in a boat and its head is submerged in water continuously for 45 seconds, it begins the process of converting to a drowned. It starts shaking, similar to the effect seen while a zombie villager is being cured. At this point, the process cannot be stopped, and 15 seconds later the zombie becomes drowned. The drowned appears with full health even if the previous zombie did not.

If a zombie is holding or wearing a picked-up item when it becomes drowned, it drops the item it is holding or wearing. Items spawned with the zombie drop with the normal 8.5% +1% per Looting level. In Bedrock Edition only, an item being held or worn by a zombie when it becomes drowned, whether it was picked up or naturally spawned, has a 100% drop rate, which includes any naturally spawned equipment dropping with full durability.

Drowned drop when they die:

In Java Edition, converted drowned are never equipped with tridents or nautilus shells.

Both naturally-spawned and converted drowned have an 8% chance of spawning spawn with a nautilus shell in their offhand.

For converted drowned only:

The trident and fishing rod are mutually exclusive. A drowned can spawn with either a trident or fishing rod in the main hand and a nautilus shell in the offhand.

In Bedrock Edition, 3.75% (3 out of 80) naturally-spawned drowned drop a trident when killed without Looting, as 3 of 20 drowned spawn with tridents and from this 15%, 25% drop the trident.

A drowned aiming with its trident before Java Edition 19w07a

A drowned swimming in Java Edition.

Drowned have a melee attack, and if they spawn with a trident, they use it as a ranged weapon. A trident is thrown every 1.5 seconds at up to 20 blocks away. In Bedrock Edition, drowned with tridents use a melee attack if the target is 3 blocks away or less. They stomp on turtle eggs, attack baby turtles, and like zombies, they chase and attack villagers, wandering traders, snow golems‌[BE only] and iron golems within 16 blocks. If on land, drowned seek out nearby water. They sometimes step onto land but quickly return to the water.

If a drowned is in any way removed by force from the water, and all nearby water sources have been blocked from it, it becomes passive in the daytime, but becomes hostile again at night. However, it heads to the nearest water source when provided access once again and becomes hostile upon making contact.

During the day, drowned swim only to attack players that are swimming in the water with them; otherwise, they stay on the floor of the water body they are in, ignoring players on land or in a boat. However, at night, drowned swim to the surface and chase players as well as baby turtles, even outside the water, like regular zombies. The speed of their swimming is equal to that of the player.

If a drowned kills a villager, the villager has a chance of turning into a zombie villager (with a 0% chance on Easy, 50% on Normal, and 100% on Hard).

Unlike zombies, drowned do not break down doors in hard mode.

They are immune to guardians or elder guardians attacks. They also have a small chance to be immune to knockback when damaged.[1]

Drowned can pick up other tridents that have not spawned with them. They also can pick it up the wrong way.

A drowned swimming in Bedrock Edition.

Drowned have entity data associated with them that contains various properties.

This page would benefit from the addition of more images.
Please remove this notice once you've added suitable images to the article.
The specific instructions are: Render of drowned in Bedrock Edition.

Issues relating to "Drowned" are maintained on the bug tracker. Report issues there.