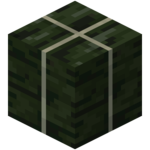 Dried kelp blocks can be mined using any tool or by hand, but a hoe is the fastest way to break it.

Dried kelp blocks can be used to store dried kelp in a compact fashion.

Unlike hay bales, dried kelp blocks cannot be placed in every orientation, despite both being bundled dried plant matter and using the same type of model.

Dried kelp blocks can be used as fuel in furnaces, blast furnaces, and smokers. Its burning time is 200 seconds (4000 ticks), and it is able to smelt 20 items. This is 2.5 times greater than the burn duration of coal and charcoal, and 0.25 times the burn duration of a block of coal. It is the fuel with the highest number of operations per fuel below 64 items. As the highest number of items that can be smelted without any refills or hoppers and without loss of fuel is 60 items (3 dried kelp blocks), this makes the dried kelp block very useful for unsupervised, non-automated smelting.

Issues relating to "Dried Kelp Block" are maintained on the bug tracker. Report issues there.