Wolves spawn naturally in forests, taigas, giant tree taigas and snowy taigas, along with all variants of these biomes (with the exception of flower forests), in packs of 4. 10% spawn as puppies.

In Bedrock Edition, wolves do not spawn in forests and giant tree taigas. [until BE 1.15.0.51]

Naturally-spawned wolves are untamed, and become hostile if attacked by the player.

Upon death, adult wolves drop 1 – 3 when killed by a player or tamed wolf.

Upon successful breeding, 1 – 7 is dropped. 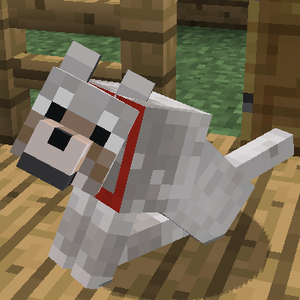 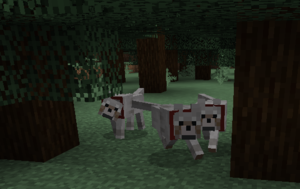 Skeletons and their variants, foxes, baby turtles, and passive rabbits actively avoid wolves. Killer rabbits‌[JE only] attack wolves. Sheep ignore wolves other than their random running after being damaged.

When the player holds meat or bones in front of the wolf, the wolf tilts its head as if to beg for the food.

Wolf teleportation is completely silent, which is not an oversight.[3]

A wolf can be tamed by feeding it bones. Once tamed, a wolf does not accept any more bones. Note that the number of bones required is random – each bone has a 1⁄3 chance of taming the wolf.[4] If the wolf is tamed, it receives a red collar and sits if not swimming. There is no limit[5] to the number of wolves the player can tame. A wolf's tail rises and lowers depending on its health. The exact health of an individual wolf can be determined by measuring the angle between its hind legs and tail. The angle indicates the percentage of health that the wolf has. Tamed wolves whine when they have low health (below 10

, so their tails always remain significantly lower than those of tamed wolves. Tamed wolves can be healed by feeding them any sort of meat other than fish; listed below, this restores as much of the wolf's health as the same food would restore hunger points when eaten by the player.

Note that wolves do not get food poisoning, so they can freely eat rotten flesh or raw chicken. Feeding a tamed wolf that is already at full health usually starts the "love mode" animation. 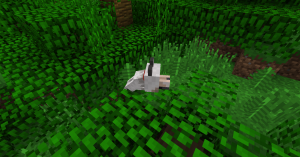 Wolves have entity data associated with them that contain various properties of the mob.