A dispenser is a solid block used as a redstone component to dispense items.

Two dispensers are naturally generated in every jungle temple.

A dispenser can be used as a container and as a redstone component that dispenses items when activated, with results varying on the item dispensed.

To place a dispenser, use it while pointing at a surface adjacent to the space it should occupy. A dispenser can be placed so that its output faces in any direction, including up or down. When placed, a dispenser always faces the player placing it.

A dispenser cannot be moved by pistons‌[Java Edition only] or water. Lava flows around a dispenser. 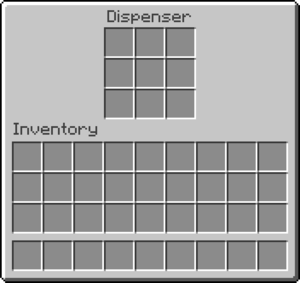 A dispenser has 9 slots of inventory space.

By default, the GUI of a dispenser is labeled "Dispenser". A dispenser's GUI label can be changed by naming the dispenser in an anvil before placing it, or by using the data command‌[Java Edition only]. For example, to label a dispenser at (0,64,0) "My Dispenser", use data merge block 0 64 0 {CustomName:'"My Dispenser"'}.

A dispenser can be used to dispense its contents randomly.

A dispenser is a redstone mechanism and can be activated by:

When activated, a dispenser waits for 2 Redstone ticks (4 game ticks, or 0.2 seconds barring lag) and then ejects one item. The dispenser does not continue to eject items while activated; ejection occurs only on the initial activation (the rising edge of an input signal). To eject multiple items, repeatedly activate the dispenser with a clock circuit. If the clock runs at faster than 5 hertz (more than 5 Redstone pulses a second), the dispenser fires once and then locks in the "on" position.

If multiple slots are occupied by items, a random occupied slot is chosen for ejection. The slot is chosen when an item is ejected, not when the dispenser is initially activated, thus it is possible to move items into or out of a dispenser between its activation and item dispensing.

The effects of being activated vary with the type of ejected item. Most items are thrown in the direction the dispenser is facing as if a player had used the Drop Item control. (Unlike a dropper, a dispenser can't feed another container.) Other items behave differently when dispensed:

When a dispenser dispenses an item, it emits a clicking sound (unless the item is a projectile or a spawn egg) and a smoke particle. If it is empty when activated, it emits a slightly higher-pitched click. The noise of a dispenser can be heard up to 16 blocks away.

A dispenser is a full solid opaque block, so powering it directly can cause adjacent mechanism components (including other dispensers) to activate as well.

In Bedrock Edition, a dispenser uses its block data field to store its orientation and activation status:

A dispenser has a block entity associated with it that holds additional data about the block.

Issues relating to "Dispenser" are maintained on the bug tracker. Report issues there.

Some other blocks can also be used to move items: