From Minecraft Wiki
(Redirected from Direction)
Jump to: navigation, search

X, Y and Z coordinate on a Minecraft map. 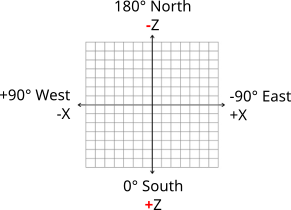 X and Z axes with directions shown, from a birds-eye view. Red highlights where these axes are different than standard.

Coordinates numerically represent a player's location in a dimension.

Coordinates are based on a grid where three lines or axes intersect at the origin point.

In Minecraft, decimal coordinates usually needs to be converted into integer coordinates by rounding down, which is called the block position of the coordinate. 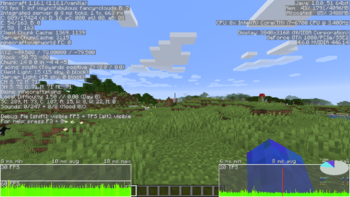 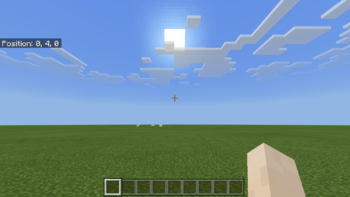 The block position of player shown in Bedrock Edition.

In Java Edition, pressing F3 (or Fn+F3 on Macs and some laptops or Alt+Fn+F3 on newer Macs) brings up a debug screen which gives the player's current coordinates in the upper left part of the screen.

In Bedrock Edition, the block position of player can be displayed by changing the world options. The coordinates are displayed in a box in the top left, if the "Show Coordinates" option is turned on in the game settings screen or /gamerule showcoordinates true is used.

In Legacy Console Edition, coordinates are shown on a map.

In New Nintendo 3DS Edition, the coordinates are always shown on the Touch Screen.

The origin point marks the zero point for the x and z coordinates. Hence, it may be thought of as the 0,0 coordinate:

The Y coordinate works a bit differently than the x and z coordinates in terms of spawning. Typically, the player does not spawn at y-coordinate 0. Instead, Y=63 is the Overworld water sea level, Y=31 is the Nether lava sea, and Y=11 is the overworld lava flood sea. To clarify: The sea level is 63, 11, or 31, which refers to the block position of top water/lava is 62, 10, or 30.

Coordinates may be put to a variety of uses.

Once players establish bases, they can note their coordinates before going exploring. Then if they get lost or respawn, they can find their way back to their bases by referring to those coordinates.

Coordinates are often used when sharing level seeds to give directions on where to go to find things.

Display of coordinates can be disabled using the command /gamerule reducedDebugInfo true: