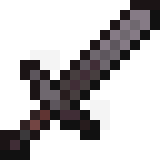 A sword is a melee weapon that is mainly used to deal damage to mobs and/or players. Swords are also useful for mining cobwebs.

A sword can be repaired in an anvil by adding units of the corresponding material, each restores 25% its maximum durability, rounded down.

Some monsters can spawn with a sword and have an 8.5% chance of dropping them upon death by player. This chance is increased by 1% per level of Looting, up to a maximum of 11.5% with Looting III. Zombies and husks can drop iron swords, zombie pigmen and piglins can drop golden swords, and wither skeletons can drop stone swords. The dropped sword is usually badly damaged and may be enchanted. Stone swords dropped by wither skeletons are never enchanted.

A vex wields an iron sword that normally has a 0% chance of dropping, because their main hand's HandDropChances is 0. However, this chance increases by 1 percentage point per level of Looting. It is never damaged‌[Java Edition only] and may be enchanted.

In Bedrock Edition, pillagers and vindicators that spawn from raids have a 4.1% chance (5.12% chance on hard) of dropping an iron sword, badly damaged although it can be enchanted with a random enchantment.

Iron swords can be found in 12.1% of stronghold altar chests, 25.6% of village weaponsmith chests, and 75.0% of buried treasure chests, all in groups of 1.

Golden swords can be found in 19.0% of nether fortress chests in groups of 1.

Enchanted diamond swords[note 1] can be found in 13.3% of End city chests in groups of 1.

Pressing attack while holding a sword inflicts damage on both mobs and other players. Upon damaging a mob or player, the sword's durability decreases by 1.

Attacking a boat or a minecart with a sword instantly destroys it, without decreasing the sword's durability.

If the attack recharge meter is 84.8% or above, and the player is standing or moving no faster than walking speed, the sword performs a "sweep" attack that can hit nearby enemies. Enemies near the hit enemy are knocked back and damaged by 1

from the slashing attack. The Sweeping Edge enchantment increases the damage dealt by 50% of the normal hit damage for level I, 67% for level II, and 75% for level III. The amount of knockback is 80% that of the knockback due to Knockback I (in other words, 2.8 blocks), and does not benefit from that enchantment. All enemies within 1 block horizontally and 0.25 blocks vertically of any part of the attacked mob and within up to 4 blocks of the player are knocked back. It is impossible to perform both a sweep attack and critical hit on the same attack. A sweep attack will only be performed when the player swings downward--hitting an entity above the player's head will not perform a sweep attack.

In Bedrock Edition, swords have no attack cooldown or sweep attack and do the following damage:

The most amount of damage that a diamond sword enchanted with Sharpness V can do is 10 in Java Edition and 14.5 in Bedrock Edition, without critical hits.

In Bedrock Edition, the knockback inflicted by swords is a bit higher than other melee items, especially while sprinting.

A sword can also be used to destroy certain blocks more quickly than with fists. Using a sword to destroy any block that doesn't break instantly decreases its durability by 2.

If a sword is enchanted with Silk Touch, either using Creative or commands, it can collect cobwebs rather than getting the string drop. This is due to the sword being classified as the proper tool for cobwebs.

The following table shows the time it takes to break blocks on which swords have any effect. Colors indicate what gets dropped:

Swords can also be used for instant breaking of bamboo.‌[Java Edition only]

In Creative mode, swords are unable to break most blocks. However, they can "break" (put out) fire, which are considered blocks.[1] Care must also be taken around minecarts, paintings, item frames and armor stands, which are also not safe with swords in Creative.[2][3]

Swords can receive the following enchantments:

Wooden swords can be used as a fuel in furnaces, smelting 1 item per sword.

Note: This video is outdated. Since Java Edition 1.9, swords can no longer block attacks. Instead, shields are used.

Issues relating to "Sword" are maintained on the bug tracker. Report issues there.